Home » Barbs and Backlashes » What Lurks Beneath, Nov. 2018, and an Update

Our Nebraska Game & Parks Commission fisheries biologists are finishing up their fall fish sampling around the state.  I am starting to hear a few stories about what they sampled, will be getting data summaries and starting to put together next year’s Fishing Forecast in the coming weeks. Now some of you are grumbling that you have seen these pictures already, even know where those fish were sampled.  Sorry, just trying to spread the word even more.  For those of you who have not seen them and know not where those fish were sampled, I will give you a couple of clues:  All of those were in southeast Nebraska, and if you will join the Nebraska Fishing FaceBook group, you will know!

Those fish and a whole lot more are still out there swimming!

One quick news update I need to post too:

The stocking by the Grove Trout Rearing Station in Royal had been delayed by the presence of fish-eating cormorants, which have since left the area.

To locate past stockings, visit Game and Parks’ fish stocking database at outdoornebraska.gov/fishstockingprogram.

Thank goodness the cormorants moved along!

Daryl is a lifelong resident of Nebraska (except for a couple of years spent going to graduate school in South Dakota). He has been employed as a fisheries biologist for the Nebraska Game and Parks Commission for 25 years, and his current tour of duty is as the fisheries outreach program manager. Daryl loves to share his educational knowledge and is an avid multi-species angler. He holds more than 120 Nebraska Master Angler Awards for 14 different species and holds more than 30 In-Fisherman Master Angler Awards for eight different species. He loves to talk fishing and answer questions about fishing in Nebraska, be sure to check out his blog at outdoornebraska.org.
Previous Venison Chili Recipe
Next After a banner year, winners announced for 2018 Great Park Pursuit 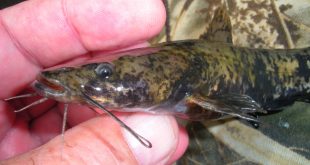