Got a hardcore fishing, ice-fishing blog post for today.  Let me share some thoughts that have been rattling around inside my head while on the ice the past couple of seasons.

All baits and lures ever invented will catch fish when used in the right place at the right time.  The trick is working through all the options to select the right bait, the right tool, for the job.  There are a whole host of variables to consider, but presentation theory dictates that the most important would be depth and speed.  Although fish will move for a bait, for the most part a person wants to be fishing close to the depth of the fish, and the more active the fish, generally the faster one can present baits and lures.

When fishing through an ice hole, presentation theory is simplified to some extent.  For example, many of us intently watch depth-finder screens while ice-fishing and we instantaneously know the depth of the fish and quickly can adjust the depth of our baits if needed (if you do not have a depth-finder, it still is not real complicated.  Start just above the bottom, work up from there, experiment.).  The spectrum of speeds used to get fish to bite is simplified during winter ice-fishing.  Let’s face it, there ain’t much range of speeds when fishing vertically through an 8-inch hole, not nearly the range that can be employed during open water. Once a person has an idea of what depth and speed are needed, they can experiment with other presentation variables in order to get fish to bite.  And you know what most guys think of next, in some cases even before they dial-in on depth and speed?

“What color didya catch’em on?”

I have blogged before about the importance of a fish’s lateral line in finding and capturing prey (Can You Feel Me Now?).  I always keep that in mind during the open-water season and it is a major consideration in the baits and lures I choose.  During the winter the water clears and most anglers believe that fish rely mostly on eye-sight to find and capture prey (thus the obsession with colors).  In addition, with the cold water of winter, activity levels of most aquatic critters and fish tend to slow down, there is less movement, slower movement.

That is all true, but I have started re-thinking those ideas.

Any more, I fish as late into the fall as possible.  It is not unusual to go from fishing open-water in late fall and be on the ice within a couple of weeks (Fall Fishing Review).  And you know what?  Slower, more vertical presentations can be some of the most effective in late fall, but I sure ain’t fishing as slowly or as vertically as I do when I am ice-fishing.  Yet, the fish still bite, and on some days they are whacking some relatively fast, active presentations in late fall when water temperatures are only marginally warmer than they will be when I hit the ice.

So maybe I have been fishing too slow while ice-fishing?  It is all relative, and even fast presentations used on the ice will be relatively slow compared to what might get fish to bite in August.  Although there is not the range of presentation speeds used below an ice-hole and generally during the winter a person does not want to use fast presentations, maybe more fish could be triggered by fishing more aggressively?  By using baits that are fished relatively slow, but simulate more life?

Let me show some baits and try to explain my thinking.  Here are a couple examples of popular ice-fishing baits, and in this case, well-used baits right from my jig box. There are some fundamental differences between vertical and horizontal ice-fishing baits (Hang Time, Hang Time Revisited).  Those baits are basic; they hang below an ice hole and can only be moved up and down by manipulation, jigging.  Here are some ideas on basic jigging strokes:

Now let’s look at a couple of similar baits: Let’s kick that up another notch: Small KastMasters and Swedish Pimples are great ice-fishing spoons.  I have a ton of Swedish Pimples.  Both baits are even larger than the typical ice-fishing jig or tear-drop, but they still travel relatively straight up and down when jigged.

Now you add some bends to small spoons or make them out of thinner material and they start to exhibit a lot more movement, wobble, and vibration when jigged below an ice hole: And then these specialized ice-fishing baits take it to a whole ‘nother level: With the plastic lips, jigging Rapalas and similar baits actually add a horizontal component to a vertical-jigging, ice-fishing presentation as the baits scoot out to the side and then circle back when they are jigged.  Notice the difference in body shapes between those two lures–there is a big difference in “presence” between those two baits.

Let me continue up the spectrum and take the vibration thing even further: Those are blade baits, one a small Cicada and the other a homemade version that I picked up in an out-of-state baitshop.  Jig those blade baits underneath you and you will feel the throb, the vibration.  They really “put out the vibe”.

And one last example: Chubby Darters and similar baits, again designed primarily for ice-fishing, also give off a lot of vibration when jigged.

OK, let’s see if I can summarize this all and make some sense.  The progression of ice-fishing baits I just showed reflects of spectrum of “presence” and vibration as they are jigged.  They are not necessarily fished faster, but I believe they fish more aggressively as you work up the spectrum.  No one bait or presentation is going to be best all the time; there always will be some trial and error and the fish will have to tell you what is best on any given day.  But, I am suggesting that the “presence” and vibration of ice-fishing baits is just as important as it is for open-water fishing.

I believe it has helped me to view my bait selection in terms of that spectrum.  I will admit that depending on the waters and species I fish in a winter, some of those baits may not get used very much, but as I have considered using vibration and “presence” I have begun to use more of the baits from the aggressive end of the spectrum–especially for big fish!  In fact, with the relatively slow speeds that are capable through an ice hole, the vibration and “presence” of the bait may be even more important than it is on open-water!

That does NOT mean the baits necessarily have to be bigger.  In fact, most of the baits I have shown come in a variety of sizes including small sizes that are very suitable for all of our panfish species.  I also believe that the fish may actually perceive baits as being larger than their actual size.

Another thing I have started doing, and this goes years back to when I first started using a depth-finder for ice-fishing, is holding a jigging rod and keeping baits on that rod moving, almost all the time.  Even when using small jigs or tear-drops for finicky bluegills in clear water, you can make those baits feel alive by “pounding” them, keeping them moving.  Pause occasionally, and fish will often inhale baits on the pause, but do not let them look too close at a still bait.  Keep your bait moving, keep it alive.

Yes, small finesse baits will be needed in some ice-fishing situations, especially in ultra-clear water, but by using vibration and “presence” one can make even the smallest of baits more detectable to the fish, and I believe more attractive to the largest fish.  Small finesse baits can fish bigger than their actual size and offer the best of both worlds–attraction through presence and movement, triggering of the bite through small size and natural appearance.

On the opposite end of the spectrum, in other ice-fishing situations, due to water clarity, the presence of cover, or just the aggressiveness of the fish, your catch can spike even higher by using bolder, more aggressive, more “alive” baits and presentations.  Oh, and in those situations, plain artificial baits will often out-fish live baits or artificial baits tipped with live bait.

Anyway, those are some of the things I have been thinking about while sitting on my bucket on the ice.  Those theories are making sense to me and I believe putting more and bigger fish on the ice.  Here is how you know you really have it right:

Gotta get back on the ice, I have more theories to test! Daryl is a lifelong resident of Nebraska (except for a couple of years spent going to graduate school in South Dakota). He has been employed as a fisheries biologist for the Nebraska Game and Parks Commission for 25 years, and his current tour of duty is as the fisheries outreach program manager. Daryl loves to share his educational knowledge and is an avid multi-species angler. He holds more than 120 Nebraska Master Angler Awards for 14 different species and holds more than 30 In-Fisherman Master Angler Awards for eight different species. He loves to talk fishing and answer questions about fishing in Nebraska, be sure to check out his blog at outdoornebraska.org.
Previous Last Chance Deer Camp
Next Tree Pruning Tips: Go Ahead and Remove The Whole Branch 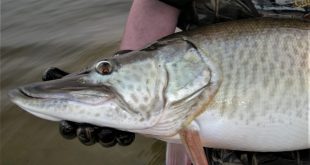 ALLIANCE, Neb. — A Sandhills fishing destination has reopened after a 28-month closure. The Nebraska …