LINCOLN, Neb. – The Nebraska Game and Parks Commission has begun the cleanup and repair of its parks and wildlife management areas affected by the March flooding.

Much work remains in assessing the impact of the damage at some state parks, state historical parks, state recreation areas and wildlife management areas. Road, buildings, campgrounds and lakes were affected.

Among the major state park areas still closed are Niobrara State Park, Fremont Lakes State Recreation Area (SRA), Two Rivers SRA, Schramm Park SRA and Louisville SRA. Work has begun on repairing the entrance road to Two Rivers. Game and Parks is working with the county to complete the project in the near future. Repairs are underway at Fremont and cleanup is beginning at Louisville.

A list of parks that are closed, partially closed or accessible only by alternate route is available on Game and Parks’ website at OutdoorNebraska.org/weatherclosures. Visitors to the page will also find a list of park areas unaffected by flooding. Though some parks are temporarily closed, more than 50 park and recreation areas remain open for outdoor recreation.

Hunters, especially those hunting the April 13 start of the shotgun spring turkey season, should be aware that many wildlife management areas still are inaccessible because of soft or washed-out roads. Several roads and bridges also remain closed. For information on specific wildlife management areas, please contact your local Game and Parks district office. Contact information is available online at OutdoorNebraska.org/locations.

Additionally, the Cowboy Trail from Norfolk to Valentine will remain closed until the trail and its bridges can be repaired. The public is advised to stay off the trail until it has reopened.

A timeline is not yet in place for reopening areas affected by the flooding. Game and Parks asks that those with upcoming camping reservations be mindful that parks staff will not be able to make determinations about when those parks will reopen or answer questions about whether reservations might be impacted until after water levels recede. Individuals with advance reservations at areas impacted will be notified if the status of their reservation is affected as soon as parks staff are able to complete assessments of the parks and services.

In addition, Game and Parks continues to remind the public that those who wish to canoe or kayak should wait until water levels recede or plan a trip on water bodies that did not experience flooding in order to avoid hazards.

Questions about specific park closures should be directed to Game and Parks headquarters at 402-471-0641. As reopening dates are set for specific parks, announcements will be posted at OutdoorNebraska.org.

Jerry Kane is the news manager with the Nebraska Game and Parks Commission. He can be contacted at jerry.kane@nebraska.gov or 402-471-5008.
Previous News Items, April 12, 2019
Next Mussels, NOT “Muscles”, Mussels! 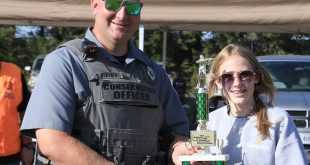