I was sitting in the office last week when I got a phone call from a buddy.  He was fishing at Holmes Reservoir here in Lincoln and had just caught what he believed was a pacu.  Pacu are a fish that live in the jungles of South America.  He wanted to know if I wanted to see the fish and of course I said “Yes!  Bring it over.”

In twenty minutes or so Val was at my door holding a bucket of water and in that water was a fish that does not belong in Nebraska waters.  I took one look at it and knew that it was not a pacu, but an Oscar. So how do you suppose an Oscar ended up in Holmes right here in the middle of Lincoln?  My favorite Dr. Seuss book is McGelligot’s Pool; it is a story about a pool in a stream back in a pasture somewhere and how a young boy (young fisherman and budding fisheries biologist I am betting) imagines all the fish in the world that might swim upstream and end up in McGelligot’s pool.  Is that how an Oscar found it’s way from South America where it also is native to Holmes Lake?

Nope, that ain’t it at all!  Let me give you a few more examples:  I have a few pictures on my desk and a lot more reports; Oscars showing up in city ponds in Lincoln and Holdrege.  A plecostomus caught by an angler from a park lake in Grand Island.  There was a report of a tilapia caught from a city lake in Omaha.  And from time to time there have been reports of piranha caught from Harlan County Reservoir or some other Nebraska water (most of the piranha reports end up being mistaken for pacu which look a lot like piranha but eat fruit, nuts and vegetables instead of meat).

Those reports come to me a lot more often than you might expect.  I probably receive at least a couple each year.

What is going on?  Is this some sign of global warming or some other ecological shift?  No.  I can tell you exactly how those exotic, alien species of fish end up in our waters–some aquarium owner has fish that eventually out-grow their aquarium or the owner has to move and they take the fish from the aquarium and release it in our local waters.

And that absolutely fries me!  Ggggrrrrrrr!!!!!!!

Is it a big deal?  Should any ole person be running around releasing fish into our public waters?  Well, most of the fish I have mentioned here are tropical or sub-tropical fish that will NOT survive a Nebraska winter.  I imagine the Oscar that Val caught had been released in Holmes recently and in another few weeks here it would have been d-e-a-d, dead.  But, what if those fish were able to find some thermal refuge, some warm-water from a power plant for example, and establish a population?  Could that be a threat to our fisheries?

Ever heard of snakeheads?  Before the prohibition on the possession of snakeheads throughout the United States, they were frequently kept by private aquarists.  There are waters in the country right now where snakeheads have become established, are reproducing, and are a threat to those fisheries.

If you take a little walk around “the Trout Lake” at Two Rivers State Recreation Area, you likely will see scads of goldfish in that sandpit.  In fact, there are so many goldfish that they are detrimental to the put-and-take trout fishery there.  Smallmouth bass have been stocked into the Trout Lake to prey on the goldfish, but eventually the ultimate solution may be a rotenone renovation to eliminate all fish and start over.

My point is that the unauthorized release of fish into our public waters is very much a problem, a concern.  Let me pick on hobby aquarists for a moment to further make my point.  In my opinion, if you choose to keep an aquarium, you are assuming the responsibility to properly care for the fish you obtain and TO PROPERLY DISPOSE OF THEM.  Dumping unwanted fish from your aquarium into the nearest body of water may seem like the humane thing to do for good ole “Otto” the goldfish or “Oscar” the Oscar, but it ain’t and it is illegal.  Those fish are not meant to be in our waters and can be a real threat to those aquatic ecosystems.  In most cases dumping those fish into the nearest body of water is not humane, it simply is the fish owner’s neglecting or passing on their responsibility.

What should be done with unwanted aquarium fish?  If you are going to keep them, I believe the responsible thing to do would be to have a plan for that ahead of time.  Find another aquarist who will buy or take the fish.  For that matter, I would rather see them filleted and fried than released into our public waters.  Take responsibility.

Val thought he had a beauty of a bluegill when he set the hook into that Oscar.  The fish was 12 inches long and weighed 1.8 pounds.  By the way, it ate a black and pink tube jig.  It really was a pretty fish.  It would have been really pretty behind the glass of someone’s aquarium.  If it was yours, I have it now.  It went on “winter retreat”.

Daryl is a lifelong resident of Nebraska (except for a couple of years spent going to graduate school in South Dakota). He has been employed as a fisheries biologist for the Nebraska Game and Parks Commission for 25 years, and his current tour of duty is as the fisheries outreach program manager. Daryl loves to share his educational knowledge and is an avid multi-species angler. He holds more than 120 Nebraska Master Angler Awards for 14 different species and holds more than 30 In-Fisherman Master Angler Awards for eight different species. He loves to talk fishing and answer questions about fishing in Nebraska, be sure to check out his blog at outdoornebraska.org.
Previous The Art of Tim Reigert: Drawing “Boo”
Next They grow up so quickly 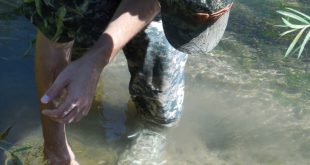