Some of you hard cores are going to be on the water for a while yet, but some are thinking of getting ready for winter.  As more put their boats, docks and lifts away for the winter, make sure to remember this:

Nebraskans are urged to check boats, boat lifts and docks for invasive species when removing them from water bodies for the winter.

The Nebraska Game and Parks Commission annually samples dozens of lakes for early sign of zebra mussels. It also not only inspects watercraft for invasive species each year, but in 2022, it set a record by inspecting more than 6,000 watercraft.

“In Nebraska, we are fortunate we do not have more lakes infested with zebra mussels,” said Kristopher Stahr, Game and Parks’ aquatic invasive species program manager. “To protect our waters from invasive species we need everyone to always clean, drain and dry their watercraft and to report new infestations quickly.” Daryl is a lifelong resident of Nebraska (except for a couple of years spent going to graduate school in South Dakota). He has been employed as a fisheries biologist for the Nebraska Game and Parks Commission for 25 years, and his current tour of duty is as the fisheries outreach program manager. Daryl loves to share his educational knowledge and is an avid multi-species angler. He holds more than 120 Nebraska Master Angler Awards for 14 different species and holds more than 30 In-Fisherman Master Angler Awards for eight different species. He loves to talk fishing and answer questions about fishing in Nebraska, be sure to check out his blog at outdoornebraska.org.
Previous Stocked Trout are Fun to Catch, Healthy to Eat
Next Bird Banding in the Panhandle 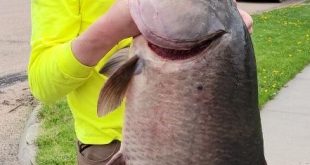