LINCOLN, Neb. – Kyle Charron knew he had a chance to be the first hunter to complete the Duck Slam this season.

The 35-year-old Broken Bow man hunts the playa wetlands every October, typically harvesting multiple duck species each year. This year, he and his friends were hunting them on private land in Custer County on Oct. 9, opening day, when he harvested a mallard and a teal.

“We knew there was the potential because we’d shot all of those species in those areas every year,” he said. But he did not take and upload photos of his harvests, a requirement in the Slam.

When they returned to hunt the following morning, Charron not only shot a mallard and teal, but a northern pintail and American wigeon to complete the Duck Slam – in about two hours.

This time, he took and uploaded photos.

The Nebraska Duck Slam, sponsored by the Nebraska Game and Parks Commission and Ducks Unlimited, challenges duck hunters to take advantage of Nebraska’s great duck hunting opportunities. To finish the slam, hunters must harvest a teal (blue-winged or green-winged) of either sex, as well as drakes of three other species: an American wigeon, a mallard and a northern pintail. All ducks must be harvested in Nebraska, and hunters must upload a photo of each harvest at OutdoorNebraska.org/DuckSlam.

Those who successfully complete the slam receive an official certificate, a Duck Slam pin and Central Flyway bragging rights. Additionally, all hunters who complete the Slam during the 2021-2022 season will be registered to win one of several great prizes generously donated by Ducks Unlimited. A drawing for the grand prize, a Special Edition Ducks Unlimited Franchi Elite 20-gauge shotgun, will take place next February.

Photo: Kyle Charron, 35, of Broken Bow, poses with his four-duck harvest; he was the first to harvest the four species required to participate in the Duck Slam, a challenge sponsored by the Nebraska Game and Parks Commission and Ducks Unlimited. (Courtesy photo).

Jerry Kane is the news manager with the Nebraska Game and Parks Commission. He can be contacted at jerry.kane@nebraska.gov or 402-471-5008.
Previous Commission will consider Free-earned Landowner Elk Permit Program
Next Don’t forget to sight-in firearms before deer season 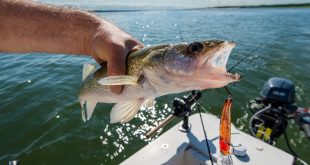 LINCOLN, Neb. – Shopping for an outdoor enthusiast on your holiday list? The Nebraska Game …