I was going to blog about something else today.  But, once again life’s events intervened and I now have something else I need to put in writing.  I have mentioned some of the things I am about to say already in a couple of places in the cybersphere, but I want to put them here again, and add a little more. . . .

The fisheries science world and a lot of others have suffered a great loss.  Dr. David Willis, Distinguished Professor and Department Head of the Natural Resource Management Department at South Dakota State University , passed away unexpectedly earlier this week.  He will be missed.

Dave’s impact stretches through the fisheries science community across the country and especially in Nebraska.  There are a lot of us pointy-headed fisheries biologists here at the Nebraska Game & Parks Commission that were at least influenced by, if not directly trained by Dave.  Many of us were very close and some were life-long friends.

I have told many of you about our sandhill lakes research that has been ongoing for several years.  That research was contracted through South Dakota State University and Dr. Willis and his students conducted all of it. You may not know it, but if you are a Nebraska angler your life, your fishing, has benefitted from Dr. Willis’ research.  Here are a couple of examples of how Dave and his students have been a huge asset to fisheries management in Nebraska:

To me Dr. Willis was a great adviser and fisheries scientist, but he was MUCH, MUCH more than that.  He was a good friend, mentor, ambassador and great man.  It is with honor that I say I knew him, was one of his first graduate students.  In many ways, I am what I am professionally, and personally, because of Dave’s influence on my life.

When I started graduate school at SDSU, I originally was advised by a different professor who left for a position in another state about six months after I started.  I then was “advised”, supervised by another professor in the interim until Dr. Willis was hired.  I will never forget my first sit down, face-to-face meeting with Dave.  He was very easy to sit down and talk with, and he told me something about it being unfortunate that I had been caught in the transition between one graduate adviser and another.  I looked at him and told him, “Oh, I don’t know, I have kind of enjoyed my independence”.  I always wondered what Dave thought when I told him that.  I wonder if he thought he was inheriting some kind of maverick?  Maybe he thought that, maybe he was?

As I finished up my graduate work, Dave was a huge help in the writing of my thesis and preparing for final exams.  My only regret is that I was not able to work under him for a longer period of time.  I am sure my graduate school days, days I enjoyed immensely by the way, would have been even more profitable.  I can tell you that after grad. school, as I progressed in my professional career, Dr. Willis was always more than willing to consult on different fisheries science questions or situations I encountered.  He was able to take what were sometimes great amounts of confusing fisheries data and make sense of it; we all learned from that.  I always looked forward to attending professional meetings where I would once again be able rub shoulders with Dr. Willis, to have a friendly conversation about our fishing and hunting adventures or to “talk shop”.

In academia, in science, publishing your work is important.  That is expected of all graduate students and Dr. Willis was a huge encouragement and help to many of us as we accomplished that milestone.  I can tell you of at least one rejection letter as I finished graduate school and pursued having my work published.  That did not make any difference to Dave, we just found another journal and submitted another paper for publication.  I am sure that effort was one of my most elementary, and I have had other papers published since, but this week it was comforting to dig into my bookshelf and find a reprint of that first paper with our names on it. Besides publishing in peer-reviewed scientific journals, I know that Dr. Willis often encouraged his students to publish popular articles.  Some of that work has even showed up on the pages of In-Fisherman magazine.  He was very practical, very applied, and wanted his students to be able to share what they were doing with the general public and especially, anglers.  I did some of that in graduate school, even accomplished some before Dave arrived on the scene, and the funny part is now that is largely what I do on a daily basis.  My job is sharing fisheries science, fish and fishing with anglers and others.  I do not know if I am any good at it, but I often try to take some science, fisheries science and other aquatic-related disciplines, and make that understandable for folks.  At heart I am just a plain ole fisherman.  I think Dr. Willis was that way too.

One of the last things I heard from Dave was a comment he left about one of my blogs, Minky.  He and Dr. Scalet had watched a mink while they were waiting for a pike to trip one of their tip-up flags on Lake Preston.  I was honored that Dr. Willis would even read my blog, let alone comment on it!

In the past year, one of Dave’s pointy-headed fish-squeezing students had the idea of calling ourselves “Willis Nation”.  He has had a tremendous influence on a legion of fisheries scientists across the nation and around the world.  I am really glad I bought one of the T-shirts! The Jackrabbit Nation, the Willis Nation mourns his loss.

It helps knowing he was fishing with family until the end.

Daryl is a lifelong resident of Nebraska (except for a couple of years spent going to graduate school in South Dakota). He has been employed as a fisheries biologist for the Nebraska Game and Parks Commission for 25 years, and his current tour of duty is as the fisheries outreach program manager. Daryl loves to share his educational knowledge and is an avid multi-species angler. He holds more than 120 Nebraska Master Angler Awards for 14 different species and holds more than 30 In-Fisherman Master Angler Awards for eight different species. He loves to talk fishing and answer questions about fishing in Nebraska, be sure to check out his blog at outdoornebraska.org.
Previous Great Plains Connections: Chasing Sunsets
Next The Great Outdoors Greatly Impacts the Economy 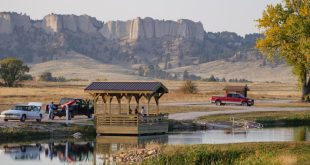