There are 1,442,567,038 Geomys bursarius, plains pocket gophers, in the Nebraska sandhills.

How do I know that?  I came to that conclusion on a muzzleloader deer hunt with my son and cousin a few years back. In between walking and still-hunting, we would bounce along on sandhills trails from one range of hills to another.  While doing that one cannot help but notice the incredible amount of gopher mounds in those hills.  We bounced over exactly 1.3% of those gopher mounds on that hunt.  If you do not believe me, a drive on Highway 2 through the heart of the Nebraska sandhills should be required of every Nebraska “resident”, and if you make that drive, look around, start counting.  There are at least  3.6 times 10 to the tenth power gopher holes.  If you cannot see them, drive Highway 61 or Highway 7 or Highway 97, you can get a much more intimate view of the sandhills, and their gopher mounds, on those roads (and I love those drives even more).

While bumping along on a sandhills trail in the middle of our hunt, we would discuss a lot of deeply intellectual things:  What was the biggest rack we had seen on a jackalope?  How many alewives a muskie could eat?  How Miss Piggy and Kermit ever got hooked up?  Where does the white go when the snow melts?  Number of gophers in the sandhills?–mind-expanding subjects like that.  I postulated (believe me I did NOT use that word in front of my cousin and son), I postulated that there were a darned lot of gophers in the sandhills and ergo there had to be a darned lot of badgers in the sandhills too (my warped mind is always thinking in terms of predator/prey relationships–it is a fish-eat-fish world).  Anyway, if there were so darned many badgers out there preying on all of those gophers, it was a wonder that we did not find a badger behind every soapweed.  (Let me digress again for a bit.  I have roots that trace back to homesteaders on the western edge of the sandhills and all I have ever known are “soapweeds”.  If you call ’em “yuccas”, you are from back “east” someplace and are highly suspect).

Anyway, while thinking of all miles we had already covered on foot and by Jeep on that hunt, we should have seen a badger or three.

We did not on that particular day, but the next day our tired legs and tired butts were again bouncing along a sandhills trail when we topped a rise and there ran a badger across the trail.

From the back seat of the Jeep, “Look there goes a badger.  See, using my deductive abilities I told you guys there had to be a significant number of badgers out here.”  I said.

Neither my cousin nor my son heard a word.  They were intent on getting that badger.  My cousin wanted to add its tanned hide to his collection back home in the cabin.

We had a .45 caliber Thompson Center Encore for taking the biggest buck we could find, but certainly did not want to blow a .45 caliber hole in the hide of a really good-looking sandhills badger.  What to do?

My cousin grabbed the first thing he could think of from the back of the Jeep, his trusty ax, and off he went running through the snow after the badger.  Daniel, my son, had been in the front passenger seat, and he baled out to offer support.

At this point I have to tell you I was crammed into the backseat of my cousin Robin’s Jeep.  My son Daniel was the one with a deer tag in his pocket and Robin was driving and sharing his hunting territory with us.  They had priority on the front, door seats.  I would cram my big boots and winter-clothed body into the back seat.  It took me some effort and time to both mount and dismount the back seat of the Jeep.

As the boys took off in hot pursuit of that badger shuffling through the snow, I knew the culmination of this little contest was going to be over before I could fall out of the Jeep.

So, I sat back and watched.

Badgers are members of the weasel or Mustelid family.  That family of creatures includes things like wolverines, mink, and skunks in addition to badgers.  Most Mustelids have the trait of being fearless, have a bad attitude to go with it, and all of them have at least some kind of odor.

I knew as Robin closed on the badger with nothing but an ax in his hand that things were going to get “western” real soon.  I did not know what was going to happen next, but I was pretty sure it was going to involve snarling teeth, dancing, an uncertain outcome, and would be funnier than a rubber crutch.

And then Robin was there, the badger stopped, the ax swung through the air, and that was it.  It was done.  Robin had his badger pelt.

The boys examined their prize and carried it back to the Jeep.  My cousin opened the back hatch to put the ax back in and threw the badger right behind the back seat, right behind me!

Remember how I said I had a hard time extracting myself from the Jeep?  Well, now I sit there thinking I was imprisoned in the back of a red Jeep with a badger that I assumed had been dispatched.  But. . . maybe it just had a bad headache, a really bad attitude, and the need to exact revenge on someone?  Visions of Looney Tune’s Tasmanian Devil sitting in my lap and lunging for my throat swirled through my head.

So I made my son and cousin let me out (maybe I scrambled over them, I do not recall) to examine the badger and confirm its demise.  Turns out it was gone, never felt a thing, but only then was I comfortable crawling back in the back seat with a badger riding with me.

The rest of the hunt was relatively uneventful, we never did find that big buck for my son, but Robin added a porcupine to his fur pile.  He always has a standing order for porcupines from which the Lakota use quills to make jewelry and many other beautiful artistic creations.  That resulted in another clown act as my cousin slid on the snow into the bottom of a steep draw while carrying his porky back.  He slid into the bottom but left the porcupine sitting at the top.  Then he could not get enough traction to get back up.

Daniel is taller, younger, and more athletic than both of us, so he got to retrieve the porky.  He would run up one side of the draw as far as his traction would allow him, gain speed down through the bottom and then up the side where the porcupine was.  After a half dozen of those iterations building speed and then trading it for elevation, he finally gained enough altitude on the right side of the draw to just barely grab a toenail of the porcupine and avalanche it down where we could pick it up.

Earlier I said that badgers are members of the Mustelid family, and all members of that family have at least some odor.  That was certainly true for the badger we added to the back of the Jeep; we rode in that handsome odor for the rest of the day.

Our lunch was also back there behind the seat, right beside the badger.

Those were the best Badger Chips I ever ate!

One last thing, when my cousin asks if you want a lot of chips or only a few chips with your sandwich?

Never, EVER, say you want a lot. Daryl is a lifelong resident of Nebraska (except for a couple of years spent going to graduate school in South Dakota). He has been employed as a fisheries biologist for the Nebraska Game and Parks Commission for 25 years, and his current tour of duty is as the fisheries outreach program manager. Daryl loves to share his educational knowledge and is an avid multi-species angler. He holds more than 120 Nebraska Master Angler Awards for 14 different species and holds more than 30 In-Fisherman Master Angler Awards for eight different species. He loves to talk fishing and answer questions about fishing in Nebraska, be sure to check out his blog at outdoornebraska.org.
Previous Mahoney State Park to Host Winterfest Olympics, Disc Golf Tournament
Next Goose #1138-33826 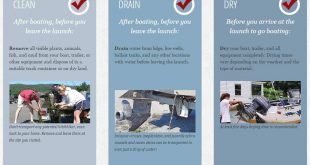 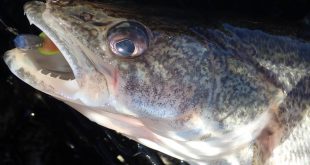