Sunday is Father’s Day.  In honor of that, let me share some memories and old photos.

I was rummaging through some boxes and albums of photos and found this one of my Dad and me. That is a picture of the two of us holding Master Angler smallmouth bass.  The fish I was holding was my first Master Angler fish, 3 pounds 7 ounces, caught on July 22, 1972 from Merritt Reservoir.  It bit on a nightcrawler fished on the bottom.  I can remember it all.  It was an early morning, 0’dark-thirty, fishing trip.  The rod had a bite on it and I got to it before Dad did to catch the first one.  He caught the next one and it ended up being bigger than mine–4 pounds.  I also will never forget the guy fishing down the shoreline from us that morning who had a whole cooler full of those big smallies when he quit fishing.

Gramps Roth also fished with us that morning.  We later caught a bunch of nice bluegills, but Dad and I got the only two smallmouth bass we caught.

I am sure that is one reason Merritt will always be one of my favorite places to fish.

Although both of my granddads have passed, I always think about them on Father’s Day.  That first Master Angler fish while fishing with Dad got me to thinking about another first:  This one is hunting related and involved my Grandpa Bauer.  Don’t laugh, but here is a picture of my first pheasant. As Patrick F. McManus would say, “My First Pheasant and Welcome To It”, http://books.google.com/books/about/They_Shoot_Canoes_Don_t_They.html?id=rQLXHA2FhWsC .

The picture was taken in front of Grandma and Grandpa’s ranch house north and east of Alliance.  Grandpa took me pheasant hunting that opening morning.  I missed a bird with my bolt action .410 early while hunting just north of the home place (still have that gun!).  After that we wandered west to the neighbor’s, got permission, and drove out to an un-picked cornfield.  We drove the trail that ran through the middle of a field and happened to look down the corn rows as we drove past.  There was a rooster pheasant!  It turned and ran down the row, so we drove on.  A few more rows and there was another rooster that also turned and ran.  So Grandpa told me to get out of the pickup, load up and start walking along the edge of the field.  I will bet I had not walked 10 rows and there was another rooster!  I waited for that bird to get up and fly so I could shoot at him, but pheasants never play fair–he turned and ran down the corn row.  I looked back at Grandpa and he told me to keep walking, the next one that turned to run away from me–“Shoot ’em!”  I walked another 10 rows and sure enough, another rooster.  It turned and started running and I raised that old .410 and rolled him.  He got to his feet, ran a few more steps, and then flew.  Believe it or not, as I recall, I managed to work the bolt by that time and sent a parting shot his way as he flew off over erect cornstalks.  I was devastated.  Grandpa and I stood there watching that rooster pheasant fly across acres of corn.  It got about halfway over that quarter section of corn, we were still watching, and all of a sudden it just folded up and dropped dead out of the sky–right in the middle of all of that standing corn!

Grandpa thought we should go out and look for that bird so we did.  We went into the corn maze and started searching, and searching, and searching.  How do you pinpoint a pheasant that just dropped out of the sky into 160-some acres of standing corn?  We looked and looked and looked, but could not find that bird anywhere.  Finally, we gave up.  We turned up a couple of corn rows to head north back to the pickup, walked maybe 20 yards, and there laid my first pheasant!

We took the bird back to the house and cleaned it.  Grandpa figured that I had probably already shot a few pheasants before, I do not know why he thought that–it was NOT my crack shooting.  About the time we were finished cleaning it, he discovered that was in fact my first pheasant.  So, naturally, we had to take a picture.  The bird was already skinned and gutted, so we grabbed my naked bird, some tail-feathers, and walked out the front door onto the walk to take a picture.

Now this is a blog post about Father’s Day, about my Dad and granddads, not me.  So here is a picture of Grandpa Bauer also standing in front of the old home place with a stringer of fish. I would guess those fish might have been caught from Lake McConaughy, but I doubt Grandpa would have driven all the way back home before cleaning them.  Maybe they were caught from Box Butte Reservoir?  I suppose Lake Minatare would have been a possibility too.  I know those were favorite fishing spots and waters where Grandpa and Grandma might have caught a bunch of channel cats and one big walleye.

To bring this full circle. . . my family and I drove out to the old home place last fall.  It is abandoned now, here is what Grandma and Grandpa’s house looked like. It was really odd to wander around the place now that it is abandoned.  Of course you know there was some wind blowing across the Nebraska prairie; it was really quiet, almost haunting.  The front door was open, almost like Grandpa was waiting for us to drive up.  So many memories came flooding back, like Grandpa and my first pheasant.  Yes, it was sad, but I could still hear Grandpa’s laugh.

You see that gate?  Gotta tell you about it. In true Nebraska homesteader, independent fashion, Grandpa could go down to the shop, power up the welder and build anything.  That gate is one example of that.  My sister and cousins and I went back and forth through that gate thousands of times as we were growing up.  I could still hear the sound of it opening and closing.

I cannot leave out my other granddad; I mentioned him in that Merritt fishing trip above.  Let me share one other thing with you.  In a pile of pictures and newspaper clippings someone saved and then gave to me, I found this. That is an old clipping from the Atkinson, Nebraska newspaper, the Atkinson Graphic, http://atkinsongraphic.com/ .  The beginning line “One of Atkinson’s better anglers, Fred Roth, . . ” makes the buttons pop off my chest.  How old I was at that time I am not sure as there was no date left on the clipping.  It had to be late ’60’s early 70’s, late fall sometime.  I have no recollection of  the events pictured in the paper.  I guess Gramps had me hanging out around fisheries management projects like rotenone renovations even when I was a kid.  I am guessing I did not want to handle the fish Gramps was holding not because my hands were cold, but because the fish were carp!  Ha.

The dam just outside of Atkinson was one of Gramps Roth’s favorite fishing holes, it was only a couple minutes drive from Gramp’s home.  We spent a lot of time down there fishing the lake itself and the Elkhorn River right below the dam.  Many was the time we would go to Atkinson to visit Gramps and hear stories of a grudge match he had going with one of the big pike down at the dam.

Anyway, those are some memories and pictures of Dad and my grandfathers from my old family album.  Get out with your father and grandfathers, go fishing or hunting or trapping with them as often as you can.  Those memories will be worth even more years from now.

Daryl is a lifelong resident of Nebraska (except for a couple of years spent going to graduate school in South Dakota). He has been employed as a fisheries biologist for the Nebraska Game and Parks Commission for 25 years, and his current tour of duty is as the fisheries outreach program manager. Daryl loves to share his educational knowledge and is an avid multi-species angler. He holds more than 120 Nebraska Master Angler Awards for 14 different species and holds more than 30 In-Fisherman Master Angler Awards for eight different species. He loves to talk fishing and answer questions about fishing in Nebraska, be sure to check out his blog at outdoornebraska.org.
Previous Watch the TernCam for New Babies Soon!
Next 62 Species Identified in the Beauty of a Buffalo Creek Backdrop 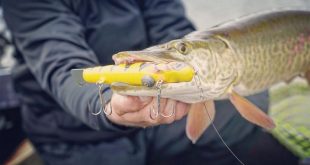 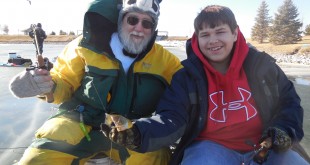 Spreading the word on this: Note:  Saturday is in the classroom, bring your questions!  Then, …