I realize Nebraska does not spring to mind when anglers think of the top fishing destinations on the continent.  I realize even more that it does not rank high on the list of places to go catch the “king of North American freshwater sport fish”, the muskie.

If you are really bored or cannot sleep, I had a paper published on the history of Nebraska muskie management in “The Muskellunge Symposium:  A Memorial Tribute to E. J. Crossman” held in Indianapolis back in 2005.  You can see a copy of the abstract here, http://link.springer.com/chapter/10.1007%2F978-1-4020-6049-6_17?LI=true .  If you wish to see the whole paper, you can, but you would have to pay for it.  I would gladly show you, but I do not have the right to share that with you here on-line.  I do have a few reprints available if you are interested.

Anyway, muskies have actually been in Nebraska since being first introduced in 1958 in Lake Minatare.  Over the years pure-bred muskellunge or the northern pike X muskellunge hybrid, tiger muskies, have been stocked in at least 70 different waters across the state.  I will tell you that muskies or tiger muskies over the years have been stocked in a lot of Nebraska waters where they probably never should have been stocked.  On one occasion I personally hauled a load of tiger muskie fingerlings to Verdon Lake and stocked them in water that was about 84 degrees, nearly as warm as my bath water that night.  I left shaking my head that day.

Before you criticize us stupid, pointy-headed fisheries biologists, let me tell you that our muskie stocking strategies and management have come a long way since then.  We phased out the stocking of tiger muskies in Nebraska waters back in the late 1990’s and have not stocked any tiger muskies in the state in years.  Muskies are certainly cool-water fish, but pure-bred muskies are actually tolerant of warmer water than both tiger muskie and northern pike.  In addition pure-bred muskies tend to be a little bit harder to catch.  The Nebraska waters most appropriate for muskie stocking are those that could use an additional large predator fish and when we stock them we want to produce a trophy fishery.  Pure-bred muskies are the best fish for our management objectives when muskies are stocked in the state.

All muskies stocked in Nebraska are now raised until they are actually 1-year old, and a length of 12-14 inches.  Those fish are stocked in early spring, every other year (odd years).  Muskies can be raised on artificial feed but muskie biologists around the country have discovered that survival rates of stocked muskies are higher if those fish are raised on a diet of minnows and other small fish.  Muskies raised on artificial feed continue to hover around near the surface looking for feed pellets after they are stocked and make easy targets for bird and fish predators.  Muskies raised on “real” prey have learned better the behaviors they will need to survive, and apparently those fish raised on minnows also are more naturally-camouflaged.

You better believe muskies are predators from the day they hatch!  In fact, to raise them in a hatchery they have to be well-fed, all the time.  If they do not have plenty of prey, they start to eat each other.  Therefore, it takes a lot of hatchery pond space and a lot of minnows and other small fish to raise muskies to a length of 12-14 inches.  Our state fish hatcheries can and do raise some beautiful muskies for stocking in Nebraska waters, but they cannot raise lots and lots of those fish.  That is why I say it is appropriate that we only have a few muskie fisheries in the state, and those will be only on waters where the habitat is appropriate and muskies can meet fisheries management objectives.

We do not expect natural reproduction of muskies in any Nebraska waters; certainly not enough to maintain muskie populations in those waters.  However, I occasionally hear some reports and have seen some pictures that make me wonder if, as was said on the movie Jurassic Park, “Life finds a way.”, and some of our muskies actually reproduce in Nebraska waters.

Right now we have fishable populations of muskies in Cottonwood-Steverson lakes deep in the Nebraska sandhills, pits like Fremont Lake #20 and Grand Island’s L. E. Ray, and reservoirs like Wagon Train, Calamus, Elwood, Enders, and Merritt.  I have heard reports of muskies caught from almost all of those waters in the past year.  In addition, we have recently introduced muskies to the west pit at Mormon Island State Recreation Area and plan to re-introduce them to Zorinsky in Omaha (muskies were present there before the zebra mussel eradication and fishery renovation).  A person might also encounter a muskie or two at Timber Point Reservoir near Brainard (Brainard, Nebraska NOT Brainard, Minnesota, although I suppose they might have some muskies around Brainard, Minnesota too).  There may be opportunities for expanding muskie stockings to other Nebraska waters in the future, but I do not expect many.  I am betting that we will continue to have around 10 or so muskie fisheries in the state for years to come.  I do NOT foresee a time when we will ever go back to throwing muskie fry or fingerlings into 70-some waters around the state.

Muskies have been present in Merritt Reservoir since 1964 and Merritt is the home of our 41 pound 8 ounce hook & line state record muskellunge.  That record fish was caught by a walleye fisherman trolling a Shad Rap back in 1992.  The muskie stocking strategy we currently employ has worked very well around the state and at Merritt we now have more muskies than ever.  In fact I have even speculated that there could be a new state record muskie swimming in Merritt’s waters, http://magazine.outdoornebraska.gov/2011/08/state-record-muskie/ .  Right now I believe a person has an excellent chance to go to Merritt specifically fishing for muskies and actually catch one.

You think ole Daryl has been chasing muskies too long if he believes that?  How about if I prove it?  (I hope you hard-core anglers are still reading, because you are going to want to see this!)

This spring my son took a trip out west and spent a couple of days fishing Merritt.  I could not make the trip with him, ended up being sick that weekend then as well, and have been kicking myself ever since.  He went out there specifically fishing for muskies; yep, heavy-duty casting tackle, heavy lines, steel leaders, ginormous artificial baits, the whole “nine yards”.

He caught a 35-inch northern pike on his first cast.

And then he caught a 36-inch muskie.  The fish followed his bait in on one cast.  He flipped back out and got it to follow on the next cast; swung his bait into an “L” turn just before going into a “figure 8”, and the fish ate his bait right in front of him!  Classic muskie fishing! He went back the next day, it was cold, windy, gloomy–a perfect muskie day! He caught another nice pike and missed a couple of other fish.

Then he topped it off with a 45-incher! That fish would have weighed over 30 pounds!

When he showed me the pictures and told me the stories, I couldn’t sit down!  I doubt he will be making any muskie fishing trips to Merritt by himself again!

Do not tell me we do not have any muskie fisheries in Nebraska.  I know better.  In fact I am going to proclaim Daniel’s catch as the best catch ever of muskies, by an angler fishing for muskies, from Nebraska waters, in a 24-hour period.  If you add it up, he caught almost 120 inches worth of muskies in less than 24 hours!  Now, a claim like that is open to dispute, so if you know of a better catch of muskies from Nebraska waters I want to hear about it.  I do know that catch would rank right up there with the muskie fishing that could be experienced in more well-known muskie states or provinces, and he did it here in lowly ole Nebraska!

By the way, there is a 40-inch minimum length limit on muskies statewide.  Those fish are meant to be trophies and are appropriately managed with very restrictive minimum length limits.  Muskies ain’t meant for Friday night fish fries.  If you are fishing water where you might catch a muskie, please be prepared; you might catch a big, strong, toothy fish that has to be released, and you owe it to those fish to be ready for them ( http://magazine.outdoornebraska.gov/2012/04/fish-handling-review/ ).  Even if you do catch a legal-size muskie, well, “There is no better feeling than watching your trophy swim away”–Muskie Hunter Magazine.  All of those muskies my son caught are still swimming, and now they have my name on them!

Daryl is a lifelong resident of Nebraska (except for a couple of years spent going to graduate school in South Dakota). He has been employed as a fisheries biologist for the Nebraska Game and Parks Commission for 25 years, and his current tour of duty is as the fisheries outreach program manager. Daryl loves to share his educational knowledge and is an avid multi-species angler. He holds more than 120 Nebraska Master Angler Awards for 14 different species and holds more than 30 In-Fisherman Master Angler Awards for eight different species. He loves to talk fishing and answer questions about fishing in Nebraska, be sure to check out his blog at outdoornebraska.org.
Previous Moist Thoughts Have Drifted Toward Morels
Next Outdoor Educator Learns How to Study Sturgeon 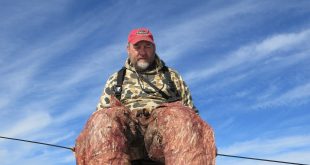 We just had the classroom ice fishing clinic in Kearney last Saturday.  At that clinic …