February 20, 2022 delet, Featured, Flora & Fauna, How To, Hunting, In The Wild, Recipes Comments Off on Light Geese are Delicious and Deserve Respect 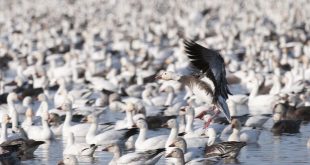 As a conservation professional, I get sick and tired of people calling snow and Ross’s geese nasty nicknames and saying that they are downright unfit to eat. Look, they are not “sky carp,” “rats with white feathers,” or “trash birds.” No, not by a long shot! Your blogger displays snow geese harvested during a recent Light Goose Conservation Order hunt in south-central Nebraska. Photo courtesy of Greg Wagner/Nebraska Game and Parks Commission. They are classified as light geese — snow … 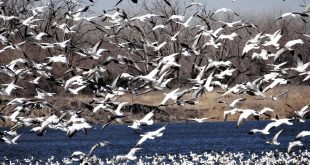 They are not “sky carp,” “lutefisk with feathers,” “an over-cooked catcher’s mitt,” or trash birds.  Your blogger displays snow geese harvested during a recent Light Goose Conservation Order hunt in south-central Nebraska. Photo by Ty Stromquist of Norfolk, NE. They are classified as light geese — snow and Ross’s geese to be exact, and they are to be respected and revered like any other natural resource! In fact, they are a worthy adversary of hunters and actually great to eat! Snow and Ross’s geese, …

LINCOLN – Waterfowl hunters are reminded that they must identify their target when hunting this winter. Trumpeter swans recently were shot in southeastern Nebraska after allegedly being mistaken for geese. Trumpeter swans are listed as an At-Risk species in the Nebraska Natural Legacy Project. They are protected by the federal Migratory Bird Treaty Act and state game laws, making it illegal for anyone to shoot them. The trumpeter swan is one of North America’s largest birds. All swans should be …

I know what you’re thinking. No, this is not going to be a blog about the memorable snow storms I’ve experienced growing up in the Cornhusker State. Nope. This is a going to be blog post about the memorable times I had last year hunting snow and Ross’s geese during Nebraska’s Light Conservation Order hunting period here in Nebraska. I can favorably recall each and every experience! I saw huge flocks of light geese. I watched superb dog work. I was fortunate to harvest …

As you may be aware, the spring migration of light geese (Snow and Ross’s Geese) is underway Nebraska, as is the Light Goose Conservation Order hunting period. But, as with a number of things in nature like migratory game birds, something strange has occurred amid the flocks of wild snow geese, according to hunters. A mythical, winged creature has emerged – a genetic mutation, if you will. It was spotted just recently in extreme southern Nebraska hopping around a decoy spread. The creature appears to be part snow goose and …

In the Field with Jeff Kurrus- While I’m There

“While I’m there” means making a photo anytime you can, regardless of how much time you have. A lot of the photos I get are happenstance, going to or from a place where I plan to shoot. Below are a couple of recent examples. JK

I added yet another case of “should’ve been here yesterday” to my bourgeoning portfolio last week. Mary Harner from the Crane Trust called to let me know that a whooping crane had been spending the night in front of one of their viewing blinds on the Platte River south of Alda. I’m hoping to get lucky and have a chance to photograph one of those rare birds that has been fitted with a GPS transmitter for a story I’m following …