As you may be aware, the spring migration of light geese (Snow and Ross’s Geese) is underway Nebraska, as is the Light Goose Conservation Order hunting period. But, as with a number of things in nature like migratory game birds, something strange has occurred amid the flocks of wild snow geese, according to hunters. A mythical, winged creature has emerged – a genetic mutation, if you will. It was spotted just recently in extreme southern Nebraska hopping around a decoy spread. The creature appears to be part snow goose and part kangaroo! The hunters who witnessed seeing this anomaly of nature marveled over it, and are referring to it as the kangaroose. One of them snapped a quick pic of it before it bounded off! If you’ll be out and about amid the spring migration of birds in Nebraska, keep a watchful eye out for the kangaroose!  This Friday Funny has been brought to you by  none other than the ‘crazy outdoor guy’  — Greg Wagner!

A native of Gretna, NE, a graduate of Gretna High School and Bellevue University, Greg Wagner currently serves as the Public Information Officer and Manager for the Nebraska Game and Parks Commission's Service Center in Omaha. On a weekly basis, Wagner can be heard on a number of radio stations, seen on local television in Omaha, and on social media channels, creatively conveying natural resource conservation messages as well as promoting outdoor activities and destinations in Nebraska. Wagner, whose career at Game and Parks began in 1979, walks, talks, lives, breathes and blogs about Nebraska’s outdoors. He grew up in rural Gretna, building forts in the woods, hunting, fishing, collecting leaves, and generally thriving on constant outdoor activity. One of the primary goals of his blog is to get people, especially young ones, to have fun and spend time outside!
Previous Brewer’s Duck
Next Fencing Funds Available to Some Panhandle Landowners 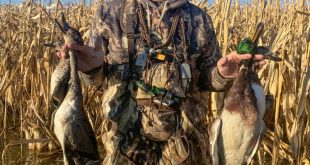