Freshwater Drum: Not a Trash Fish

July 6, 2021 delet, Featured, Fishing, How To, In The Wild, open water fishing, Parks, Recipes, Travel Comments Off on Freshwater Drum: Not a Trash Fish 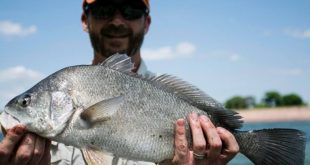 I watched closely as the guy excitedly reeled in the fish he had hooked from a local sandpit lake in eastern Nebraska. Upon landing it, I heard him dismally say: “Oh man, it’s a damn drum, that’s a trash fish, I gotta throw this back.” At this point, I walked over to the man and casually said: “Hey, that’s a nice freshwater drum you’ve caught. Did you know those are good eating if you prepare them right?” “Are you kidding …

September 29, 2017 Barbs and Backlashes, Conservation, Fishing, How To 0 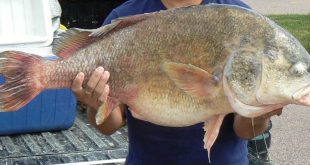 I caught a freshwater drum the other day, as far as drum go, a pretty nice one.  It just hammered my crankbait. Reminded me of this song. I categorically deny that I have a drum tattoo on my chest.  Do not have any piercings either. Have a great weekend everyone, GO FISH, see if you can dry off a drum.

One thing I love about my job is I hear a lot of fishing reports and fish stories.  I never get tired of them, especially if there are some pictures to go along with them.  One hit my computer yesterday, and I have to share it with you.  In fact I will do some editing, but let you read the message that Tyler E. sent to me: Howdy Mr. Bauer, I thought you might find this interesting.. My friend Seth …

I have a couple of interesting pictures to show you.  This is a 26-inch walleye recently found at Johnson Lake. Here are a couple of other views: Obviously that walleye “bit off more than it could chew”.  Walleyes are predator fish, no doubt about it.  I have made the point before that predator fish may try to eat anything that will fit in their mouth.  Unfortunately, they can get something in their mouth that is a little bigger than will …

Got a fishing report to give you, but let me give a little background to the story.  Back in the mid-1990’s I worked for a couple of years in our newly-established fisheries management office in south-central Nebraska.  That region included much of the the Tri-County canal and reservoirs on that canal.  In the years I was there we were not able to spend much time on the canal reservoirs, but from what we knew of the high flow-through rates and …

I enjoyed a gorgeous, cool morning fishing in Nebraska’s Elkhorn River and backwater areas with a couple young family members of mine as well as a young family friend. I’d highly encourage you and your family to take advantage of Nebraska’s nice, cool summer weather while we have it by goin’ out and doin’ a little fishin’! You don’t need fancy stuff, we used simple tackle and nightcrawlers. Don’t forget your fishin’ permits for those 16 and older! Have fun, …

With yet another cold, wet weather pattern upon us here in the Heartland, I thought I’d share with you what a fine day it was yesterday on the river French Fur Trappers called Corne de Cerf, French for the horn of the elk, because of its meandering nature and tributaries. It was a nice spring day indeed to be on the Elkhorn! My buddy and I weren’t the only living, breathing things on the river this last Tuesday afternoon in April …