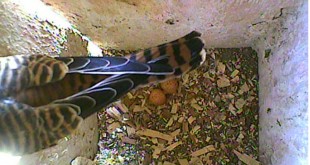 Early Sunday morning the birds gave me a brief glimpse of the clutch and, as expected, there were three eggs.    If anymore are on the way, expect it to arrive on Monday or Tuesday.    Maybe by the time the female is done laying eggs spring will arrive?  Maybe?  Please!