Home » Barbs and Backlashes » “How Many Could I Catch?”

“How Many Could I Catch?”

One theme I return to over and over again is the diversity of fishing opportunities we have in Nebraska.  I have often said that we may not have as much water as some of our neighboring states, but we offer variety!

I have suggested that one fun and worthy challenge is to see how many of species of fish you can catch from Nebraska waters.  In recent years, with the micro-fishing thing gaining interest, there have been some anglers who have really taken on the challenge of catching as many different species as possible.

The recent issue of Nebraskaland magazine, a special issue by the way, has an excellent story about one Nebraska angler and the variety of fish he has caught around the state.  You gotta read it!  I have “copied and pasted” it here.

In 2020, Norfolk resident Scott Buss put a long thought-out plan into action. He would travel the state and see how many species of fish he could catch — fishing public waters as much as possible.

Like many anglers, Scott Buss of Norfolk began planning his 2020 fishing trips way before the year started. From researching stocking reports and fishing forecasts to talking to various anglers throughout the state, he began writing a list of where he wanted to fish. Yet he did have one goal that was different than most. After looking at the number of fish on Nebraska’s state record list, which is 70, Buss wanted to see how many species he could catch. By the end of the year, he had caught 52. His plan seemed to work.

Buss is a recorder of information. From plants to birds, he writes lists of items he sees in the outdoors. When fishing, he’s as likely to look into the trees as he is his line in the water. And since he’s fished since he was a kid, it was natural for him to begin this personal challenge.

“Sometimes I hear that there are no places to fish in Nebraska,” he said. “But that couldn’t be further from the truth. I really wanted to show how good the fishing can be throughout the state.” So on Jan. 3, 2020, he traveled to Fort Robinson State Park to put his theory into motion.

By the end of his trip to Fort Rob, he had crossed brown, brook and rainbow trout off of the list. Then, he spent at least parts of 81 more days to see how many more he could catch.

His search for various species led him to all corners of the state, from the Missouri River to Sandhills streams and a long list of state park system ponds. He visited 13 state parks and state recreation areas, re-visiting many of them multiple times, picking up unique fish like a striped bass hybrid and saugeye at Willow Creek State Recreation Area, pumpkinseed and yellow perch at Cottonwood Lake State Recreation Area and shortnose gar at Dead Timber State Recreation Area.

But the state park system offered him more than places to fish. “Wherever I found myself, there was always a state area nearby to set up camp. As a bonus, these areas have some of the most spectacular views Nebraska has to offer. It doesn’t matter if you prefer eastern river bottom forests, the Sandhills or the rocky buttes out west, there’s a place to stay in all of it.”

Buss spent the majority of his time fishing public waters to show people how productive these waters can be. And he didn’t do it with a large amount of tackle either. Most of the time he was carrying a shoulder bag, a rod-and-reel or two and some nightcrawlers. “There is no telling how many containers of nightcrawlers I bought last year. You can catch just about any of Nebraska’s fish with a nightcrawler.”

From grass pickerel and river carpsucker to white bass and northern pike, Buss was thrilled with each of his new catches — even the ones he couldn’t immediately identify. When he wasn’t sure what fish he was holding, he would reach out to other anglers, Nebraska Game and Parks fisheries biologist Daryl Bauer or search Fishes of Nebraska.

But identifying fish became even more of a challenge when he added microfishing to his list of techniques, where catching an inch-and-a-half fish could be the trophy of the day. “I can still remember fishing with my dad and granddad when I was younger and seeing a school of minnows swim by. I told my granddad that I was going to catch one of them. He laughed, saying I had no chance. A short time later, I was holding a shiner in my hand.”

Those “micro” fish not on the state record list include various shiners, darters, chubs and killfish, and Buss fished for these armed with size No. 30 tanago hooks, 2-pound test line and barely a smidge of a nightcrawler or some other bait to coerce them into biting.

“These fish are awesome,” he said, “and many of them are beautiful. I love fishing for big fish like muskies, but these micro species are just as exciting for me.”

“Fort Robinson State Park was probably my favorite place to fish,” Buss said. “It was as much about the scenery as it was the fishing.” Scott enjoyed this scenery even more intimately by camping, just as he did at nine other areas across the state. “There’s nothing better than camping next to a lake or stream,” he said. “There’s no getting up at 4 a.m. and driving to the lake. Just wake up, enjoy a Nebraska sunrise, grab a pole and go fishing.”

To research your next fishing and camping adventure, visit OutdoorNebraska.org.

Daryl is a lifelong resident of Nebraska (except for a couple of years spent going to graduate school in South Dakota). He has been employed as a fisheries biologist for the Nebraska Game and Parks Commission for 25 years, and his current tour of duty is as the fisheries outreach program manager. Daryl loves to share his educational knowledge and is an avid multi-species angler. He holds more than 120 Nebraska Master Angler Awards for 14 different species and holds more than 30 In-Fisherman Master Angler Awards for eight different species. He loves to talk fishing and answer questions about fishing in Nebraska, be sure to check out his blog at outdoornebraska.org.
Previous Survey seeks input this spring, summer on state park areas
Next Bike rentals, refreshed beaches among improvements at southwest state recreation areas 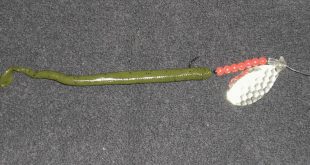 Today, I am going to return to a familiar topic–catch and release or more specifically …