The year of our Lord two thousand and seventeen was a really big year in Nebraska.  Sure there was some little thing called the sesquicentennial, but that is not what made it a big year.  What made 2017 a BIG year was the 20th anniversary of our Aquatic Habitat Program!  It was so big that NEBRASKAland Magazine got around to doing a story about it:

To maintain, restore or enhance the capacity of a waterbody to produce and sustain ﬁsh.

In the mid-1990s, Nebraska’s reservoirs constructed during the middle part of the 20th century were showing their age: Basins had filled with silt, shorelines had eroded, water quality had degraded, and less-than-desirable fish communities made for poor angling.

Anglers wanted change. More than 650 anglers attended 19 meetings across the state beginning in 1993 to discuss problems and possible solutions related to aging reservoirs and aquatic habitat. Seventy anglers were invited to meet with biologists and others at a three-day meeting in 1994, in which they identified priorities and developed a course of action for addressing the state’s aquatic habitat issues.

In 1996, the Nebraska Legislature passed a new law requiring most anglers to buy a stamp in order to fish in the state. Money generated by sales of the newly-established Aquatic Habitat Stamp went into a fund, which was only used to make improvements to aging Nebraska waters.

More than 20 years later, sales of the stamp have generated more than $22 million for improvements to 127 waterbodies across the state. Many additional funding partners, including the Nebraska Environmental Trust Fund, the Federal Sport Fish Restoration Fund, Natural Resources Districts and cities across the state, have contributed an additional $73 million for Aquatic Habitat Program projects, which have improved water quality, removed sediment, stabilized shorelines, added submerged aquatic habitat structures, provided for the construction of fishing docks and piers and much more.

Because it was the first of its kind, the American Fisheries Society recognized it with a Sport Fish Restoration Outstanding Project award in 1998. The true beneficiaries of this program have been anglers, who have better access and opportunity in Nebraska than ever before.

Now, and into the future, anglers will continue to reap the benefits of so many successful projects across Nebraska.Because it was the first of its kind, the American Fisheries Society recognized it with a Sport Fish Restoration Outstanding Project award in 1998. The true beneficiaries of this program have been anglers, who have better access and opportunity in Nebraska than ever before.

The locations of Nebraska waterbodies that have benefitted from Aquatic Habitat and Angler Access projects are statewide.

Drone footage of the project is below; view more on the Aquatic Habitat Program webpage.

Yep, I know, it is 2018 and this is the first you have heard about this twentieth anniversary.  We ain’t big on fanfare and attention-grabbing, we want our Aquatic Habitat Program to just “Get-R-Done”, making “The Good Life”, our water quality, aquatic habitat, and fishing, even better!

Daryl is a lifelong resident of Nebraska (except for a couple of years spent going to graduate school in South Dakota). He has been employed as a fisheries biologist for the Nebraska Game and Parks Commission for 25 years, and his current tour of duty is as the fisheries outreach program manager. Daryl loves to share his educational knowledge and is an avid multi-species angler. He holds more than 120 Nebraska Master Angler Awards for 14 different species and holds more than 30 In-Fisherman Master Angler Awards for eight different species. He loves to talk fishing and answer questions about fishing in Nebraska, be sure to check out his blog at outdoornebraska.org.
Previous Six state recreation areas will allow fireworks on July 4
Next Family Fishing Night in Norfolk canceled 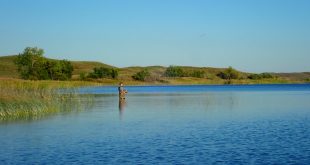 I know, I know, the news release has made the rounds and you might have …