Game and Parks provides updates on cougar research and management

GERING, Neb. – The Nebraska Game and Parks Commission delivered an update of its cougar research and newly approved management plan for the species to Panhandle residents this week. The information was delivered during public meetings in Gering on Wednesday, April 4, and Chadron on Tuesday, April 3.

The meetings featured a presentation by Sam Wilson, Commission carnivore and furbearer program manager, and addressed questions about the big cats, commonly referred to as mountain lions or pumas.

Wilson said cougars in Nebraska are part of a larger population that includes South Dakota’s Black Hills and states throughout the West.

Using a combination of genetic surveys and research captures, Wilson said the latest estimated population in the Pine Ridge is 59 mountain lions, which includes both adults and kittens, and outlined the methods used to reach that number.

He pointed out that the Pine Ridge is one of three areas with resident populations, and the only area in the state where they have estimated the population. Resident populations also have been documented in the Wildcat Hills and Niobrara River Valley but no estimates have been made for the size of those recently formed populations. There is no statewide population estimate, and the number of cougars in the Pine Ridge and the rest of the state continually fluctuates because of births, deaths, and animals moving in and out of areas.

The Commission has collected DNA samples from scat since 2010 and has collected tissue samples of cats they have captured and equipped with GPS tracking collars the past three years. The Commission has 17 cougars with working collars, nine females and eight males. All but one those cats, a tom in the Wildcat Hills, are in the Pine Ridge area. During the research, the Commission has placed collars, or at least ear tags, on 58 cougars – a tally that includes many kittens and animals that have dispersed or not survived.

Wilson said the population data is sufficient to consider another mountain lion harvest season in the Pine Ridge. He noted that the Commission staff would continue to monitor the population including any known deaths and could make a recommendation to its Board of Commissioners based on the agency’s mountain lion management plan adopted in October 2017. The Board of Commissioners would then decide whether to hold a season.

Mountain lions are native to Nebraska but disappeared from the state in the late 1890s, largely because of decimation of prey species, unregulated hunting and habitat loss. The first modern confirmation of the species in the state was made in 1991. The Nebraska Legislature protected the cats with game animal status in 1995 and statutes to allow hunting were created in 2012.

The Commission has had one hunting season for the species. Five mountain lions were harvested in 2014 – three in the Pine Ridge and two in northeast Nebraska.

Wilson noted that he views mountain lions as an important component to the ecosystem, and the Commission’s goal is to maintain a resilient, healthy and socially acceptable mountain lion population. He said the Commission does not take harvest recommendations lightly, and noted that no game animal managed by the Commission has ever become endangered and game species such as deer, elk and turkeys have thrived with the same management principles used with mountain lions.

The meetings at the Gering Civic Center and Chadron State College Student Center were part of a series that also included a stop in North Platte the previous week and will end at Valentine on Wednesday, April 11. That meeting will be at the Cherry County Fairgrounds at 7 p.m. CDT.

More information about mountain lions in Nebraska, including the Commission’s management plan for the species, may be found at outdoornebraska.org/mountainlions.

Justin Haag has served the Commission as a public information officer in the Panhandle since 2013. His duties include serving as regional editor for NEBRASKAland Magazine. Haag was raised in southwestern Nebraska, where he developed a love for fishing, hunting and other outdoor pursuits. After earning a bachelor’s degree in journalism from Chadron State College in 1996, he worked four years as an editor and reporter at newspapers in Chadron and McCook. Prior to joining the Commission in 2013, he worked 12 years as a communicator at Chadron State, serving as the institution’s media and public relations coordinator the last five. He and his wife, Cricket, live in Chadron, and have two children.
@Nebland_Haag
Previous What Lurks Beneath, April 2018
Next Learn new skills at Fort Kearny Outdoor Expo on May 12 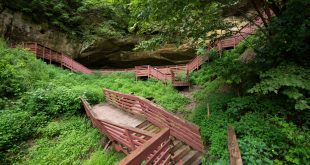