Home » Conservation » Care about and Contribute to Nongame Wildlife

Care about and Contribute to Nongame Wildlife

We see them everywhere in Nebraska.

They are readily spotted in our yards, acreages, farms, ranches, parks, wildlife management areas and various other places.

We see a variety of them when we are hunting, fishing, trapping, hiking, biking, camping, picnicking and participating in other outdoor activities.

They are “nongame” wildlife species. They number in the thousands and are not hunted, trapped, fished, harvested or collected. They are birds, mammals, fish, mollusks and crayfish, reptiles, amphibians, insects, and plants.

And, they need your help!

Oh sure, I know what you are thinking (or saying) if you’re in the hunting, fur harvesting and angling public: “Hey, I already financially support wildlife with all of the required permits and stamps I have to purchase for my outdoor pursuits, so why should I contribute even more money to these critters. Why do they matter, anyway.”

Truth is, the law prohibits revenue derived from the sale of hunting, fur harvesting and fishing permits to be spent on nongame species. That’s why Nebraska’s Wildlife Conservation Fund was created.

The fund allows individuals to make voluntary, tax-deductible contributions to help nongame wildlife through the Nebraska State Income Tax system. The opportunity for taxpayers to contribute to non-game wildlife first appeared on state tax forms in 1984.

This fund is especially appealing to those receiving refunds. Donated dollars have a major impact since Wildlife Conservation Fund monies are matched with other grants, so that a dollar donated becomes four dollars for aiding wildlife!

The Wildlife Conservation Fund makes many types of projects possible, including:

For some, it can be particularly hard to understand why anyone would want to conserve obscure animals and plants. Surely there are some species we would be better off without, right? Do we really need each and every one of them? Species go extinct all the time, don’t they?

It is important to understand that we are all interconnected, and when enough of these connections are broken it puts our own survival at risk.

As an example, consider the downward trend of native bees and certain other pollinating insects like butterflies, moths, beetles and ants. These animals provide pollination services essential to fruit, nut and seed production, and moreover, for nearly three-quarters of the staple crop plants that feed human kind and for more than 75 percent of all flowering plants in the world!

And, if you like to hunt, you need to know the upland game birds that you enjoy pursuing such as the ring-necked pheasant and northern bobwhite quail depend on the food resources provided by both pollinated plants and the adults and larvae of pollinating insects. Game birds also prefer to nest or seek shelter under plants that reproduce using the services offered by animal pollinators.

This concept of being interconnected or what is called “biodiversity” has been famously described with the airplane rivet analogy.

Suppose you are sitting in a plane flying through the air, and you look out the window and see rivets starting to fall out of the wing. Plane wings have massive redundancy, so you can likely lose a fair number of rivets before the wing falls off. Interestingly, engineers would have a hard time telling you exactly how many rivets you could lose before the wing falls off, but they could be certain that if rivets kept falling out at some point the wing would fall out and the plane would crash.

The situation is much the same for wildlife and the benefits we receive from nature: if you keep removing species from an ecosystem, at some point you will lose most, if not all of the natural benefits from that site, of which may prove to be critical. There’s a lesson to be learned here: The various and diverse ecosystems, habitats, and plant and animal communities that make up our state are all interdependent upon one another.

Wildlife, its habitats and ecosystems additionally play an integral role in the lives of us Nebraskans. They add beauty and enjoyment to our lives. We benefit from them in aesthetic, recreational, social, educational, ecological, and economical ways. It only makes sense to do our part to ensure biodiversity conservation or the viability of all Nebraska’s wildlife species, ecoregions and natural communities.

Please consider supporting the Wildlife Conservation Fund when completing your state income taxes this year or with a direct contribution through our Game and Parks website. On your tax form, look for the peregrine falcon symbol. Whether the amount you are able to give is large or small, it’s an investment in the future of Nebraska’s natural resources that will pay big dividends for future generations.

With your help, we’ll continue our mission of being the principal advocate for and steward of our state’s number one asset – your precious natural resources.

Thank you for your support!

A native of Gretna, NE, a graduate of Gretna High School and Bellevue University, Greg Wagner currently serves as the Communications and Marketing Specialist and Manager for the Nebraska Game and Parks Commission's Service Center in Omaha. On a weekly basis, Wagner can be heard on a number of radio stations, seen on local television in Omaha, and on social media channels, creatively conveying natural resource conservation messages as well as promoting outdoor activities and destinations in Nebraska. Wagner, whose career at Game and Parks began in 1979, walks, talks, lives, breathes and blogs about Nebraska’s outdoors. He grew up in rural Gretna, building forts in the woods, hunting, fishing, collecting leaves, and generally thriving on constant outdoor activity. One of the primary goals of his blog is to get people, especially young ones, to have fun and spend time outside!
Previous One Down, One to Go!
Next Time Change for Landowner Meeting about Pheasants 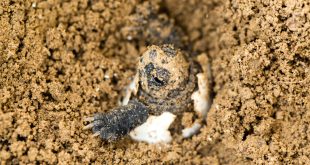 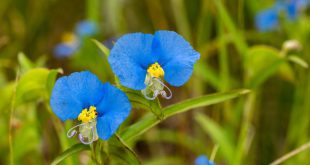 Story and photos by Gerry Steinauer, Botanist As their name implies, each dayflower blossom is …