Been a busy spring for me, and I have not blogged about any fishing that I have been doing for awhile.  Oh, I have been fishing, you can count on that, I just have had plenty of other stuff to blog about.  So, let me show some pictures and give a little update.

My son and I met up with my trout-bum nephew for a trip this spring.  As a matter of fact, Seth, had just returned from guiding fly-fishermen in Chile for the winter.  The first thing he did after getting home to Montana was make a trip down to good ole Nebraska to fish for some big toothies.  My cousin had warmed a few up before we got there. It took Seth all of about an hour of fishing and he had a 40-incher! I call my nephew a “trout-bum” because he is a fly-fishing guide, the past two winters he has guided in Chile, and he is guiding on the Big Horn River in Montana right now, Bighorn Angler .  That muskie was NOT caught on a fly, so Seth was really happy with it, but the goal of his trip was big toothies on a fly.  He had several muskies follow his streamers in the few days we fished; for some reason they were curious enough to follow it, but not convinced to eat it.  We are trying to figure that out, give us some time, we will.

So, Seth did not get a muskie on the fly on this trip, we did accomplish that feat years ago with a smaller muskie, but he did manage a beautiful, 36-inch pike on the fly. That is a big, ugly, or beautiful, depending on your point of view, bucktail-and-synthetic streamer in the jaws of that pike.  The streamer was given to Seth, I am going to call it a Forsline Foghorn Leghorn.  Thanks, Jake F.!  Also notice the dog, that is Seth’s dog, Molly.  They are attached at the hip.  Sorry girls, Seth has his fish and his dog, and right now does not need anyone else.  Ha.

Of course my son rang the bell with several fish, another 36-inch pike (skinnier than Seth’s): The three of us do not get together often to fish, not nearly often enough, so when it happens it is quite an event.  We even had a fly-by in commemoration: My son and I did not throw streamers.  We fished with muskie tackle, casting rods and reels, heavy line, muskie baits.  “Go big or go home”.

Yes, I caught fish too, a fish, less and smaller than the boys: But that was just fine.  Oh, I wanted more, and I will be figuring out why the boys caught more than I did, but anytime I can be net-man and camera-man for my son and nephew, “I’m In!”

It was muskie fishing, typical muskie fishing.  We worked hard for every fish we caught, went long, LONG lengths of time between fish at times.  But then there were some windows when we had a lot more activity.  Do not ask me why some times were better than others, all I know is you had to keep pitching it out there and reeling it in.  Do that long enough, and magic will happen.  Big toothies do NOT come easy.

Speaking of “magic”. . . . The last day we fished was one of those where we fished hard with not a whole lot to show for it.  With a little more time to fish that day, I had a feeling something was going to happen.  We had caught plenty of fish, had had a very successful trip, but wanted that one big fish to top it off.  About that time I hear my son go “Oh, Baby!” and turn to see him laying the steel to a fish right in front of him.  I immediately dropped my rod and grabbed the net.

The fish was mammoth, another one of the beasts that we were fishing for (e.g. Ten Yards and The Beast).  The fish followed Daniel’s muskie bait in, and then opened its jaws and ate it.  Ate it all!  Daniel was transfixed as he watched the fish do that right in front of him, but after a second remembered to SET THE HOOK!  The fish did not move, the water just boiled.

Fish of the trip, the one we were looking for, the cherry on top! That is what a 46.5-inch muskie looks like.  She was a beauty, massive.  Once we got her in the net, all I could do was stand there with my mouth open and stare at her.  The girth was 22 inches, it would have weighed in excess of 30 pounds.  What a beautiful, awesome fish.  What an honor to just be able to see a fish like that, just to look at her and touch her!

If you are reading this and wondering all the usual questions fishermen ask, do a little homework here on my blog, you can figure it out (e.g. Nebraskies).  If you make a trip, let me remind you that there is a 40-inch minimum length limit, statewide, on muskies.  They are awesome fish and chances are you are going to have to release most of the ones you catch.  In fact, I would request that you release all of them, even the trophies!  Be sure you are ready to handle fish like that, ( A Fish-Handling Review ) and plan to get a graphite replica ( Finally ).  We have a special reverence for those fish, all of them were released so we can catch them again!  We would appreciate it if you would do the same! Notice we upgraded to an even larger landing net this year!  And are glad we did, Frabill Nets!

I love fishing with those boys.  Let me be arrogant for a moment, but I just have the feeling when the three of us are on the water, fish are going to be caught, big fish are going to be caught.  We are going to “Get-R-Done”, no doubt in my mind.  When we are on the water together, it is just a matter of time.  We do not goof around, all we do is fish, fish, eat, fish, fish, sleep, and repeat.  I love every minute of it, and wish we could do it every day.

Before heading for home, we did take a moment to especially remember one of our best fishing partners, one who got us all started.  One who is no longer with us.  He is on our mind all the time: Miss you, Dad.  The boys and I dried a few off for ya.

Daryl is a lifelong resident of Nebraska (except for a couple of years spent going to graduate school in South Dakota). He has been employed as a fisheries biologist for the Nebraska Game and Parks Commission for 25 years, and his current tour of duty is as the fisheries outreach program manager. Daryl loves to share his educational knowledge and is an avid multi-species angler. He holds more than 120 Nebraska Master Angler Awards for 14 different species and holds more than 30 In-Fisherman Master Angler Awards for eight different species. He loves to talk fishing and answer questions about fishing in Nebraska, be sure to check out his blog at outdoornebraska.org.
Previous Volunteers Needed at Branched Oak and Verdon Lake State Recreation Areas May 2
Next Preview of Ft. Atkinson Living History on WOWT 6 Outdoors 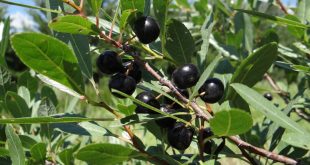