I have an interesting news release I want to share with you: Now I know this open house, this particular fish passage project, is not going to be of great importance to many of you unless you are familiar with the Cedar River particularly in the Spalding and Ericson area.  But, I am betting that very few reading this have even considered that there might be a need for fish passageways on Nebraska rivers and streams.  No, we do not have migratory salmon using Nebraska rivers, but we do have many species of fish in our rivers and many of them move long distances up and down our rivers.  As the news release suggests, there are segments of Nebraska rivers that could have more fish and more fishing opportunities, especially for channel catfish, if there were not barriers on those rivers.

What kind of barriers?  Well, there can be some natural barriers like the Norden Chute on the Niobrara River, but Nebraska also has a lot of water diversions and dams on its rivers and streams.  In fact go to Nebraska’s Department of Natural Resources website and check their dam inventory .  There are a lot of dams on Nebraska rivers and streams: I was not able to figure out what the different colored symbols meant on that map, but each one of them represents a dam of some type.  Please do not think that I am suggesting that each and every one of those symbols represents a barrier to fish movement, but it does illustrate that we have a lot of potential fish barriers that could be inhibiting the movement of fish up and down Nebraska rivers and streams.  No thought was given to the passage of fish when those structures were built; however, when opportunities arise we can try to accommodate fish movement around those structures.  We have an opportunity right now on the Cedar River.

At least some funding for this project will come from our Aquatic Habitat Program.  This is just another way we are trying to make “the Good Life”, and fishing, even better! Daryl is a lifelong resident of Nebraska (except for a couple of years spent going to graduate school in South Dakota). He has been employed as a fisheries biologist for the Nebraska Game and Parks Commission for 25 years, and his current tour of duty is as the fisheries outreach program manager. Daryl loves to share his educational knowledge and is an avid multi-species angler. He holds more than 120 Nebraska Master Angler Awards for 14 different species and holds more than 30 In-Fisherman Master Angler Awards for eight different species. He loves to talk fishing and answer questions about fishing in Nebraska, be sure to check out his blog at outdoornebraska.org.
Previous Walleye Fishing Workshop Set for March 12 at Ak-Sar-Ben Aquarium
Next Waterfalls in Nebraska? Yes, There Are! 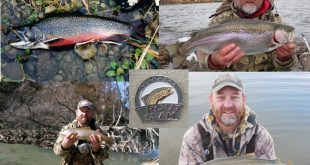