I’m hearing from a few reservoirs around the state that the fall pattern is starting to show itself. Slabs and blade baits are producing some fish once in a while, and it’ll only improve. Big Mac remains slow from what I’ve heard from numerous friends. A blade bait did produce a 63 pound flathead for my friends at Sherman Reservoir last week, though. What a blast that had to be!

Elwood is still a bit behind, it seems. We looked for fish on the graph for a little while, and tried some of our go-to spots, and the hardest part was trying to differentiate between all the bait on the screen and active fish. Almost everywhere we went, there was bait. A few places looked promising next to drop offs, so we anchored up and put some fresh shad down in 45 feet of water. It wasn’t long before we had a few bites, and my friend set the hook on one. Turned out to be a nice 3 pound channel cat. They were being real tentative and not committing to the bait at all. We lost several others as they were holding onto the shad long enough for you to feel it, but would then let go. We decided with a slow bite that we’d try something else. My friend Grant and I loaded the boat and headed over to the Tri County Canal where I often fish. We tried some trolling and picked up another channel cat, and things slowed down again. Until….that one bite. The leadcore tightened up, then slack, then tight again. As Grant grabbed the rod, the fish finally realized he was hooked, and then the fight was on. I don’t know how long it took us to get him in, but I would wager a guess on about 15 minutes or so. G

rant just moved back here from Hawaii, so this was a pretty new experience for him, and entertaining for me. I told him what to expect as I was certain it was a big flathead. Not until the fish surfaced did he believe me, which made things more interesting. After helping Grant with some drag settings on the reel, I finally netted the fish, if that’s what you want to call it. The fish did not fit real well, and I was trying not to let him flip back in and snap the line. Grant grabbed one side of the net and we finally wrestled him into the boat. The monster went 45” long with a girth of 27.”

My scale turned out to be less than reliable, so using a few charts found on the internet puts the fish at about 44 pounds, which I feel comfortable with. The body was full and it was a very healthy fish, so who knows, it may have hit 45 or 46. After smiling for some pictures, we watched as it flipped water at us with its monstrous tail. The crankbait was not very deep in his mouth and just ahead of his gills, so it was a nice clean release. Of course we hope to see that fish again next year when it’ll be over 50 pounds.

Of course, the next day we headed back out and tried for more, only to strike out. We did lose a real nice sauger close to the boat, as well as a nice crappie. Managing a few channel cats and white bass on cranks was enough to keep it interesting on an otherwise slow day.

The temps look stable for the immediate future, which I believe will keep things slow to average on the water. Once we get that cold snap, look out. I still say chances are good that we’ll have an outstanding fall bite, but we need to have that cold snap for things to really go crazy.  Enjoy the weather while you can, we all know what’s coming.

Brian Robinson is a lifelong resident of central Nebraska who has spent his entire life chasing fish of all kinds. Nearing 100 Master Angler awards for 13 different species, Brian spends most of his time fishing central Nebraska water, including the Tri County Canal system and associated waters.
Previous “Grass is always greener”
Next Youth Waterfowlin’ 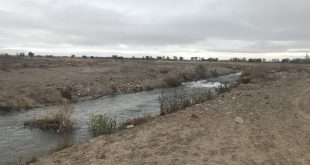 One morning last July, I was riding in a UTV down a trail at Indian …