Here I am with my first snow goose, thanks to Scott Wessel who took me out hunting. To keep warm, I like to wear my warm bunny bomber hat (which I stole from my boyfriend who has no need for it in California). Scott scoffed and told me that it looked “stupid,” but after sitting in the blind for an hour and seeing that the wind was starting to pick up, he eventually changed his tune. Anyway, Scotty and I had a fun time. I cannot express how exciting it was to see that goose fly in. I only got the chance to shoot the one, but I was happy. I kept grinning all the way back home.

If you want to see what I did with my goose, I made Pulled Berry-Chipotle Snow Goose Sandwiches with them. Check out my recipe here: http://foodforhunters.blogspot.com/2013/04/pulled-berry-chipotle-snow-goose.html Then, on Easter Sunday, I got the chance to go pheasant hunting at Pheasant Bonanza in Tekamah. I went out there and really didn’t expect much out of my shooting. I know how fast pheasants can be, and my dove hunting trip in Arizona a couple years back taught me much humility. But my proudest moment that day in Tekamah was shooting the quail. The guys and I were walking across the field in a line. I heard gun shots to my right and a quail came flying out of nowhere, headed straight past me. Somehow, without much thought, I quickly swung my shotgun and BAM! I hit the bird right in the head. The guys couldn’t believe it.  I also went home with a rooster and a hen that day. Best Easter ever. I ditched Easter brunch to go hunting and it was totally worth it! Sorry, Chris (Thody). While driving to and from Colorado for a wildlife management short course, fellow PIO Julie Geiser and I kept our eyes peeled for pronghorn. I always thought that they were strange looking creatures, almost alien-like. It was so cool to be able to see some. Hopefully, I will get the chance to shoot one in the future. I bet they’re tasty! Here are some photos from the pallid sturgeon brood-stock collection effort. It was such a privilege to be able to see and handle these prehistoric fish. Some people say they’re ugly, but I kind of think they’re cute. See? How can you not fall in love with those beady little eyes? I’ve also been hanging out with a lot of the fisheries guys at the Calamus Hatchery. Doug Kapke let me squeeze the eggs out of two females and the semen out of two males. They were surprisingly strong. I had lots of trouble trying to keep a hold of them. Those females were HUGE! This took place at Sherman Reservoir, by the way.

The photo below is me wrestling with a female walleye… and Doug standing ready in the background in case if I did anything stupid. They’re such beautiful fish. I also got to go out to photograph the night crew setting out the lines. It was one of the coolest experiences of my life, but that story will have to wait for another day. Finally, I got to fire the 3-in. Ordnance Rifle at Fort Hartsuff’s Spring Muster. Boom! I embarrassed myself by not yanking hard enough the first time. NEBRASKAland Associate Editor Jenny Nguyen-Wheatley was born in Nha Trang, Vietnam, and moved to the United States with her parents in 1992. She graduated from Bolsa Grande High School in Garden Grove, California, in 2008 and completed her bachelor’s degree at UCLA in 2012. Wheatley was editor-in-chief for her high school newspaper and continued to write in college, freelancing for various publications, the Tiger Woods Foundation and writing for her blog FoodForHunters.com. After graduating college, she moved to Nebraska in early 2013 to join the Commission as Regional Editor at NEBRASKAland Magazine. She then became associate editor in 2015. Wheatley enjoys hiking, camping, horseback riding, hunting, fishing and wild game cooking.
Previous A Major (League) Fishing Guide on Great Outdoor Radio Show
Next Hung Up 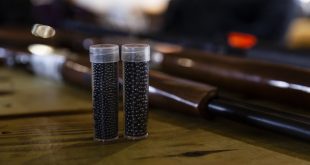