May 10, 2021 delet, Featured, Flora & Fauna, How To, Hunting, In The Wild, Travel Comments Off on Late Season Turkey Tips: Gettin’ That Gobbler

We are in the latter part of the season for spring wild turkey hunting in Nebraska. Using a baseball analogy, it is the bottom of the 9th inning, your team is behind, the bases are loaded, there two outs and you are up to bat! I don’t think there is any doubt about it, spring wild turkey hunting late in the season is challenging. However, there are still plenty of gobbles to be heard and birds to be worked plus …

How to Hunt Nebraska’s Wild Turkeys in Winter

December 21, 2020 delet, Featured, Flora & Fauna, How To, Hunting, In The Wild, Travel Comments Off on How to Hunt Nebraska’s Wild Turkeys in Winter 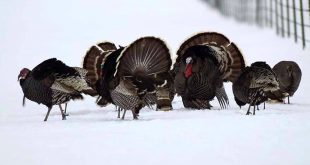 The Nebraska Tourism Commission announced this week that it approved a new brand campaign, entitled: “Nebraska Nice.” This campaign emphasizes one of Nebraska’s strongest assets — us, it’s people. However, “Nebraska Nice” has a two-fold meaning.  It’s not only about we-Nebraskan’s being nice to our visitors and to each other, as we are, but it’s also a reference to the “nice moments” that make the best vacations memorable and special.  It’s about that special moment that is talked about for years and years to come. …

That’s right, blog readers, I’ll be “talkin’ turkey” –  fall wild turkey hunting in Nebraska – on my Weekly Outdoor Report airing on Omaha’s WOWT 6 News Thursday evening at 6 p.m. CST during the sportscast with Greg Ortiz. I’ll be encouraging you, if you hunt, to buy a Nebraska fall wild turkey hunting permit and experience a beautiful time of year in Nebraska! You could even shoot your very own, free-ranging Nebraska wild turkey for your Thanksgiving family gathering …

On the opening morning of Nebraska’s popular Spring Shotgun Wild Turkey Hunting Season, I bring (who I believe to be) the Grandmaster of Wild Turkey Hunting to you on my one-of-a-kind Great Outdoor Radio Show presented by Mahoney State Park. Who is the Grandmaster of  Turkey Hunting? It’s this man! None other than legendary turkey hunter, veteran turkey call maker (www.turpincalls.com) and humorist Dick Turpin of Lincoln, NE! Dick joins me along with his sidekick Dudley Moore on the show …