My Favorite Insect Gets Even Better

Story and photos by Chris Helzer

It’s hard to pick a favorite insect, but I have anyway. It’s the camouflaged looper, which is an inchworm that turns into the wavy-lined emerald moth. The moth is pretty enough and I’m sure is fascinating in its own right, but it’s the caterpillar I love.

The camouflaged looper feeds on flowers of many kinds. What makes it incredible, though, is that it also selects pieces of the plant it’s munching on and glues them to its back as camouflage. When it switches to another kind of flower, it changes its disguise to match. It’s a really impressive strategy for a tiny creature with an even tinier brain.

I’ve only been lucky enough to spot this little inchworm a handful of times, despite being on constant lookout for it. I guess that’s a testament to the effectiveness of its camouflage, but it also makes every sighting an event to celebrate.

My most recent looper observation came at the Nature Conservancy’s Niobrara Valley Preserve after finishing up a long day in the field. I actually spotted the inchworm on a sunflower as I was driving slowly down a two-track road and scanning for photo opportunities. I have the eyes of a hawk, no big deal.

Anyway, I stopped and photographed the critter and then grabbed both the sunflower and the inchworm to take back and show other staff. Everyone was gone for the evening when I arrived at the Preserve headquarters, so I took the caterpillar to my cabin for the night. I put the sunflower in a jar of water and added another flower (hoary vervain), hoping to entice the inchworm to change its diet and disguise. Then I put a paper towel across the water to prevent drowning accidents and put an upside-down glass on top of the jar.

The next morning, I woke up and immediately checked on the caterpillar. To my surprise and delight, it had altered its appearance overnight. However, it had chosen a costume I hadn’t predicted. It was a completely reasonable decision, given the dominant color in its new environment, but it still made me shake my head in amazement.

The looper didn’t switch to the vervain and decorate itself with bits of purple flower. Nope, the little bugger had crawled down to the paper towel and made itself a beautiful white garment to match! It was the perfect choice.

I didn’t think I could love the camouflaged looper any more than I did. I was wrong.  ■ 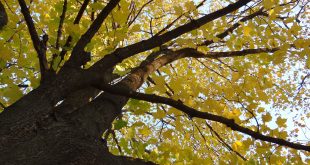