Spring and its morel mushrooms get all the limelight, but hard-core nature enthusiasts in Nebraska know that autumn rains deliver a mushroom bounty in the woods that’s far more diverse, robust and rewarding.

Fall mushroom hunting offers a bunch of benefits, and not just for fairy tale goblins and witches!

It offers a refreshing, cool walk in the woods amid fall foliage colors, a chance to better understand forest ecology, and an opportunity to see a variety of woodland wildlife, as well as an avenue to collect some delicious, healthy food for the dinner table!

Did you know there are a variety of delectable edible wild fungi species with different flavors and textures that can be harvested in the Cornhusker State in autumn, especially during the month of October?

In fact, a search for edible fall fungi tends to be more like a scavenger hunt if you are used to picking morel mushrooms in the spring. One place to begin looking for fall mushrooms is on or around fallen trees and dead or decaying wood, most notably after rain. Wild edible fungi in the fall tend to be found fewer in number and farther apart though than spring morels. However, when you come across them, a nice mess can be gathered in your local woods and a good meal can be planned.

From a nutritional perspective, wild fall mushrooms are a powerhouse! Low in calories, they are rich in B vitamins and a non-fortified source of Vitamin D. Minerals such as selenium, potassium, copper, iron, and phosphorus are all available in wild mushrooms. Choline, a wholesome nutrient, is also present in edible fungi. These wild edibles also possess antioxidant and anti-inflammatory properties as well as beneficial dietary fibers. However, some mushrooms, even those long proven to be edible to humans, can cause gastrointestinal troubles, other physical distress, and in rare cases, even death. Caution is advised!

As the saying goes: “There are old mushroom hunters, and there are bold mushroom hunters. But there are no old, bold mushroom hunters.” Make certain you positively identify a mushroom before consuming it because the wrong fungi may cause extreme sickness and even death! Check with reliable, credible sources for correct identification. Learn your keys to properly identifying edible fungi by studying reputable field guides and apps, making a spore print and acquiring information from naturalists or veteran, responsible hunters. And, if there’s any doubt (as to what it is), throw it out!

The Missouri Department of Conservation has some excellent information on the basics of mushroom hunting, here.

The principal rule when mushroom hunting in the fall is to get to know just a few species — and get to know them well. Giant puffballs, oyster mushrooms and chicken of the woods are classic examples of this rule, and have emerged already in the moist river and creek bottom woodlands of eastern Nebraska.

The giant puffball mushroom Calvatia gigantea (Langermannia gigantea)  is by far among the most recognizable of all fall fungi. It is white, large, round and smooth, in appearance and can reach diameters larger than a basketball!

The giant puffball is rated “choice” for eating. The fruiting body of a puffball grows directly from its root system in the ground. It feeds off of decaying organic matter within the soil.

If you find one with a stalk or stem, discard it; it’s not a puffball and may very well be an unsuitable look-alike, characterized by a rancid odor.

Members of the puffball family grow from July through November in most North American softwood and hardwood forests. Their outer coloration is typically white to olive brown, and should always be white inside for use at the dinner table. As puffballs age, their centers turn yellowish-brown and eventually dry, producing spores. It is said that a single giant puffball produces up to 7 trillion spores. To understand how the puffball got its name, step on the dried shell after a puffball is spent, and watch it “puff” smoke — in the form of millions of dried spores.

The giant (puffball) grows primarily in open-timber, but can appear in pastured ground and even in some urban areas. During prime conditions, it can look like a lost volleyball out-of-place on woodland court.

Now, to prepare a giant puffball for consumption, cut or peel the outer shell.  Do not wash or soak the meat unless insects have laid first claim. The sweet smell and savory flavor of the puffball makes an excellent addition to a saute of onions, bell peppers and other favorite garden vegetables. The most popular method of preparation, however, is frying. Slice it thin like a fish fillet. Coat with a fish or chicken batter before frying. Enjoy!

The oyster mushroom  Pleurotus ostreatus and P. pulmonarius refers to the mushroom’s shape, not taste (sorry, seafood lovers). However, it is a very tasty mushroom! It is prolific in the fall. The broad cap of the oyster can be white, gray or brown and it can be found on the decaying wood of cottonwood, ash, poplar and aspen trees. This fungi species pushes through the tree bark after a decent rain. The oyster mushroom is whitish or yellow-tinged in color and is usually attached to deciduous trees in shelf-like clusters.

Sometimes called the tree oyster mushroom, box elder mushroom or elephant ear, it can also grow from a stubby, thick, off-center, white stalk. The prized oyster mushroom is widely dispersed throughout North America. Moist river and creek bottoms with an array of hardwood and softwood trees are prime places to search for the oyster fungi.

The oyster’s pleasantly mild smell distinguishes it from inedible look-a-likes that either lack odor or smell like tree bark. It actually smells a bit like licorice. Oysters are attached to wood, have gills that are free and go all the way to its base. As with any mushroom, it is important to carefully cut it at its lowest part with a sharp, larger pocketknife or pair of scissors. Always check aging oysters for white grubs; then wash, slice or tear into smaller strips. Roll the damp pieces in a dry mixture of batter and fry. ”M’m! M’m! Good!”

Chicken of the woods (sulfur-colored) Laetiporus sulphureus is easy to identify thus they’re considered one of the best fall mushrooms for beginners to gather. Other names for it are chicken fungus, chicken mushroom, and sulfur shelf. The genus is Laetiporus.

The “chickens” are easily recognized by their impressive size and large clusters of overlapping brackets, vibrant yellow-orange to orange cap colors and bright yellow tips. This mushroom is a polypore, meaning the fungi disperses spores through small pores (holes) on the underside of its caps. The colors of chicken of the woods will fade and the fungi becomes tougher as it grows older.

The chicken fungus grows generally in clusters on living and dead trees, stumps, logs and buried roots overlapped in a shelf-like way, and often in great quantity. Try to harvest chicken of the woods when it is smaller, vividly colored, and tender. Clean these mushrooms by wiping them down with a damp cloth.

The chicken of the woods is a culinary treat with sort of a lemony, meaty taste. Some folks think it hits the palate similar to its chicken namesake. You can use chicken of the woods in place of chicken or tofu in virtually any recipe. This mushroom also works well in curries, rice recipes, risottos, casseroles, or any egg dish. It’s important to note that this is one of those mushrooms that sometimes causes gastric distress in certain people so cook it thoroughly. Avoid a possible stomach issue by only sampling a little bit.

With regard to other wild edible fungi in the fall, be sure to check out looking for other species such as shaggy mane, hen of the woods, chanterelle, lion’s mane and turkey tail.

Somewhere in Nebraska, there’s a piece of land or a patch of woods that you’d love to hunt for fall mushrooms, right?

Before venturing onto any private property, know that you must have permission from the landowner or his or her agent, whether the ground is posted or not.

Hobby picking (non-commercial picking) for edible wild fungi is allowed on Nebraska Game and Parks Commission owned and controlled properties, unless signed or indicated otherwise. A current, valid state park permit is required on motor vehicles entering state park lands. On state wildlife management areas and certain state park lands, hunters most likely will be present, so be seen by wearing some blaze orange clothing, take appropriate safety measures, respect others utilizing these areas and lands, and please take only quantities of edible fungi that you will use.

Remember, autumn, even more so than spring, is when we can best reap the edible gifts of our wooded environs, and mushrooms make nearly all of it taste even better. Get yourself some for the campfire cauldron!

A native of Gretna, NE, a graduate of Gretna High School and Bellevue University, Greg Wagner currently serves as the Communications and Marketing Specialist and Manager for the Nebraska Game and Parks Commission's Service Center in Omaha. On a weekly basis, Wagner can be heard on a number of radio stations, seen on local television in Omaha, and on social media channels, creatively conveying natural resource conservation messages as well as promoting outdoor activities and destinations in Nebraska. Wagner, whose career at Game and Parks began in 1979, walks, talks, lives, breathes and blogs about Nebraska’s outdoors. He grew up in rural Gretna, building forts in the woods, hunting, fishing, collecting leaves, and generally thriving on constant outdoor activity. One of the primary goals of his blog is to get people, especially young ones, to have fun and spend time outside!
Previous Public invited to plant trees at Chadron State Park
Next “Survey Says” 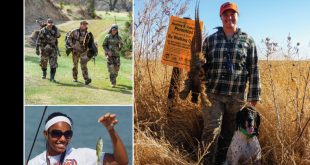