Joel Jorgensen is a Nebraska native and he has been interested in birds just about as long as he has been breathing. He has been NGPC’s Nongame Bird Program Manager for eight years and he works on a array of monitoring, research, regulatory and conservation issues. Nongame birds are the 400 or so species that are not hunted and include the Whooping Crane, Least Tern, Piping Plover, Bald Eagle, and Peregrine Falcon. When not working, he enjoys birding. 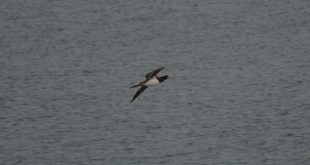 On Tuesday morning I found myself in Sioux County on a late spring/early summer birding trip with my wife when I received a text about a possible Brown Booby observed over the Memorial Day weekend at Harlan County Lake near Alma. Brown Boobies are seabirds, typically seen on or near oceans.  Nebraska is a long way from any ocean.  So, the report had to be bogus, right?  Well, the observer and text was from Jeff Drahota who observed the bird …

It’s May – where are the warblers? 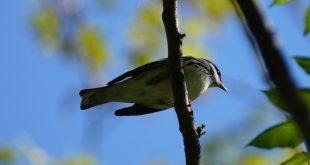 Birders wait all winter for May to arrive because spring migration peaks during this month.  Among the many avian highlights are the warblers.  Warblers are small songbirds and there are 30+ species that regularly arrive in Nebraska in spring, primarily during May.  Some, like American Redstarts and Yellow Warblers, breed in our state while others, such as Magnolia and Chestnut-sided Warblers, are headed farther north and are only passing through Nebraska.   A few warbler species are nondescript, but other species are … 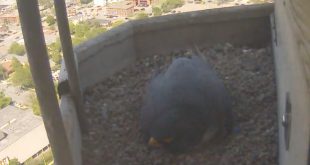 As most falcon-watchers know, the Peregrine Falcons have resumed incubating their eggs after abandoning them for about two days at the end of April.  The two days or so the eggs were left exposed to the elements were rainy and chilly.  At the time, when the birds were gone, that appeared to be it – the end of the 2017 nesting cycle.   Is that still the case? My understanding is that the falcons more or less commenced incubation on … 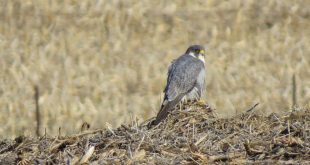 The local resident Peregrine Falcons in Lincoln and Omaha are well-known and even famous, but this time of year there are other Peregrine Falcons in Nebraska.  The additional falcons are migrants passing through between wintering areas well to the south of us and breeding sites in the far north.   I’ve seen a few of these migrants this spring, including one sitting in a soybean field on Monday (1 May) a few miles south of Beatrice in Gage County.  A couple … 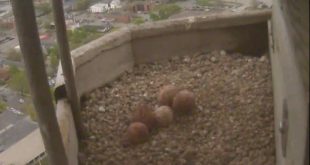 In another unexpected twist, the Capitol’s Peregrine Falcons appear to have abandoned their five eggs shortly after they completed their clutch.  The pair had just welcomed their fifth and final egg late on 27 April or early on 28 April.   Events seemed to be playing out as expected as the birds’ commenced the month-long incubation period.  Then, inexplicably, the falcons left the eggs unattended Sunday (30 April) morning in the cold and rainy weather.  Both birds have essentially been … 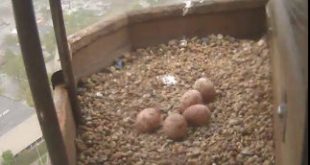 The Peregrine Falcons welcomed egg #5 either very late on 27 April or early on 28 April. The end of April has traditionally been the period when we would expect eggs to begin hatching rather than time when the birds are completing their clutch.  The increasing size of the clutch certainly increases the odds that one or more will hatch.  This has to be it, right?  There won’t be a sixth…will there? Good birding! 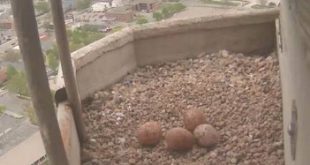 The Peregrine Falcons welcomed another egg. It is not clear when precisely the fourth egg was laid since the birds have been incubating regularly since the third egg was laid. Is this it?  To find out, visit our Falconcam by clicking HERE. Good birding! 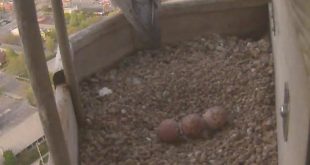 The Peregrine Falcons welcomed egg #3 Saturday night. I wasn’t sure any more eggs were coming since it had been so long since the second one was laid.  Jeanne Hibbert provided specific data about the timing of this year’s eggs on the Facebook page, Peregrine Falcons Lincoln NE.   The period between the first and second egg was 60.5 hours and it jumped to 97.5 hours (slightly more than 4 days) between the second and third egg.  This is a notably … 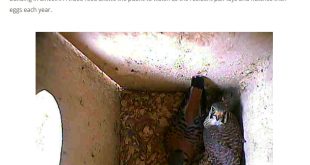 Big news!   After overcoming an array of technical obstacles, our American Kestrel streaming video, A.K.A. KestrelCam, is back up and running after being offline for more than a year. Currently, our resident unbanded female is incubating five eggs, the first of which was laid in late March. This means we may only have to wait approximately two weeks before the eggs will begin to hatch.  I know a lot of people missed KestrelCam during its absence and will be please … 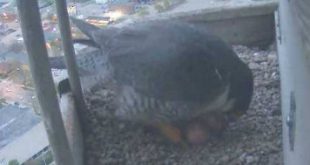 On Tuesday evening, the Peregrine Falcons welcomed egg #2. It is anybody’s guess how many more eggs there will be, if any.  To watch the adventure unfold, please check out our Falconcam.