I actually escaped the office a week or so ago and helped with some field work!  I got to smell fishy again!

Mostly I just want to show you some pictures of the fish we were sampling, flathead catfish at Branched Oak Reservoir.  However, I realize there might be some who read this and want more information, so let me recommend a previous blog if you want to know why we were doing this sampling:  Branched Oak Flatheads.

Once again let me start by saying that when pointy-headed fisheries biologists are sampling fish from a population, we typically are NOT just trying to collect the largest specimens.  We ARE usually trying to collect a representative sample of the variety of sizes of fish in a population.  When we sample flathead catfish at Branched Oak Reservoir, we literally collect fish from 6 inches long to 60 pounds.  At Branched Oak we see lots of flatheads from 20-some inches long to 30-some inches long; we collect so many of those fish that they are hardly noticed.  We handle those fish and release them as quickly as possible.  No, I do not have many photos of the average size fish.  However, I like some pictures of the smallest flatheads because they are so colorful: Of course we all like big fish, so I have some photos of the 30+ pounders that my boat partners and I handled on this most recent trip. Now you can see why I smelled fishy at the end of the day.  Any day I smell fishy is a good day!

It also happened to be one of the hottest days of the year, and we handled hundreds of pounds of flatheads that day.  It was a workout, we sweated, we guzzled water to stay hydrated!

I was not able to slip out with the guys a day or so later when they went to Pawnee Reservoir and did some of the same sampling.  We have a very good flathead catfish population at Pawnee too, and an up-and-coming blue catfish population! All of those fish were released unharmed, they are swimming out there, and I told you where.  I will be getting a few of them to bite in the coming weeks.

The boat driver when I went along was Jordan Katt and I have to thank him for the photos.  I was busy netting and handling fish.  Thanks, Jordan!

But not so much for this one! Although I do like cats, big flatheaded ones in particular!

Daryl is a lifelong resident of Nebraska (except for a couple of years spent going to graduate school in South Dakota). He has been employed as a fisheries biologist for the Nebraska Game and Parks Commission for 25 years, and his current tour of duty is as the fisheries outreach program manager. Daryl loves to share his educational knowledge and is an avid multi-species angler. He holds more than 120 Nebraska Master Angler Awards for 14 different species and holds more than 30 In-Fisherman Master Angler Awards for eight different species. He loves to talk fishing and answer questions about fishing in Nebraska, be sure to check out his blog at outdoornebraska.org.
Previous The Lake Life Is The Great Life
Next Mend and Hope 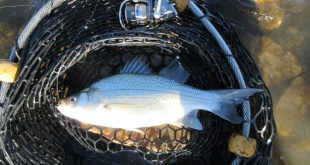