Sometimes nature is pretty obvious with its signs about what a person shouldn’t touch. Cacti, yucca plants, porcupines and rattlesnakes, for instance, have signals akin to a flashing billboard. Then there are more devious dangers such as poky thorns on beautiful rose bushes and rash-inducing urushiol on unassuming poison ivy plants. I’m not sure where the subject of the following story fits into that spectrum, but I’ve become convinced I should have been paying a little closer attention to some signs.

, look at the fuzzy caterpillar,” my 10-year-old daughter Kiera said with excitement, as the striking yellow-green specimen with a conspicuous series of black spikes of hair on its back marched down the trunk of a tree in the middle of our campsite at Fort Robinson State Park.

I’m no entomologist, but the talent scout in me took one glance at this peculiar looking larva and knew it was destined to become a model for some attractive photos. My concentration turned to letting the caterpillar crawl on to my hand to keep it from escaping the scene – so focused in my goal that I didn’t quite catch some words Kiera was relating to me about a lot of caterpillars being poisonous. By letting the fuzzy critter move up and down my arm, I detained it long enough to put a macro lens on a camera body for the impromptu photo shoot. As soon as the camera equipment was ready, I placed the caterpillar back on the tree and joyfully started snapping images.

After capturing photos of the creature from all angles – even one of it dropping a load of feces — we watched as it reached the ground and slowly marched toward Soldier Creek on its incredible journey of becoming a moth. I was excited to learn the name of the creature I had captured, so resorted to the smartphone. After searching for “yellow green caterpillar with spikes,” here’s one of the first links that popped up: http://redandthepeanut.blogspot.com/2010/10/american-dagger-moth-caterpillar.html

From that article, I quickly learned that the American dagger moth (Acronicta Americana) caterpillar has an incredible characteristic I wish I’d known a few minutes earlier. It’s poisonous.

“That’s what I said!” Kiera exclaimed, as her dad stood in front of the camper reading excerpts from the article with a dumb look on his face. Yes, at that point I realized those spikes on the caterpillar’s back, and the words from my daughter (Good job, Chadron Public Schools!), might have been trying to tell me something.

Remarkably, the hairs of the dagger moth caterpillar are hollow and contain toxins that cause a reaction on a person’s skin when they break off. It’s more of a delayed thing like poison ivy than an instant sting like a bee or wasp, so there’s no immediate deterrent to keep a person from handling the caterpillar. At the Game and Parks Commission, we frequently explain that people need to leave wildlife babies alone. Perhaps this is nature’s way of getting out the same message.

Oh, but I figured I was in the clear because I was quite careful to not mess up the caterpillar’s hair for its big-time photo shoot. No petting, no coddling, just a hike up and down my arm. It wasn’t long, however, until the itching commenced. I wondered if it was just in my head, or if I had been struck by that setae – or as I like to call it, a “coat of poison darts.” Alas, it wasn’t long before a little red rash appeared on my index finger, right at the point the caterpillar climbed aboard. Nothing major, for sure, but it’s been an annoyance since.

I know what you’re thinking; it serves me right. One should always be careful handling things they don’t know about regardless of how fuzzy they appear or how cool the photos will look.

A little later, after our attention had turned from the caterpillar to other campsite business, a brutal scene caught my attention from the corner of my eye. A ferocious predator to the insect world, a Turdus migratorius (commonly known as the American robin), was mercilessly pecking away at the same caterpillar that had just been the subject of my photos. Whether or not that bird had a nasty case of heartburn later, I don’t know. Maybe my daughter knows.

I guess that caterpillar, similar to me, had to learn a lesson the hard way that day: It’s a jungle out there.

Justin Haag has served the Commission as a public information officer in the Panhandle since 2013. His duties include serving as regional editor for NEBRASKAland Magazine. Haag was raised in southwestern Nebraska, where he developed a love for fishing, hunting and other outdoor pursuits. After earning a bachelor’s degree in journalism from Chadron State College in 1996, he worked four years as an editor and reporter at newspapers in Chadron and McCook. Prior to joining the Commission in 2013, he worked 12 years as a communicator at Chadron State, serving as the institution’s media and public relations coordinator the last five. He and his wife, Cricket, live in Chadron, and have two children.
@Nebland_Haag
Previous Piping Plovers: The perils of the first migration
Next Commission Adopts Some Fee Increases, Recognizes Partners 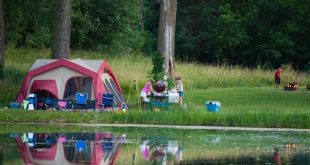 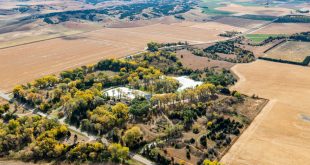