LINCOLN – The public chose the name “Dinan” for the peregrine falcon chick raised in a nest box at the Nebraska Capitol this year.

A contest was held earlier this month to name the falcon. The public submitted name suggestions, a list of finalists was selected, and the public voted to determine a winner. A total of 364 initial submissions and 1,001 votes were cast during the contest.

The two people who suggested the winning name are Cheri Boardman of Weeping Water and Dina Barta of Lincoln. Each will receive a framed certificate and a one-year subscription to NEBRASKAland Magazine.

The chick, which hatched on May 16 from the nest box on the 18th floor of the Capitol, is close to fledging. The falcon pair that raised the chick has nested at the Capitol since 2005. The Capitol’s peregrine falcons have successfully produced 23 offspring over the past 12 years. Four of them are known to have nested elsewhere as adults: two in Omaha, two in Topeka, Kan.

Watch the Capitol nest box by viewing the Commission’s FalconCam at OutdoorNebraska.org.

Jerry Kane is the news manager with the Nebraska Game and Parks Commission. He can be contacted at jerry.kane@nebraska.gov or 402-471-5008.
Previous Enjoy Events in July at Niobrara State Park
Next July Outdoor Calendar 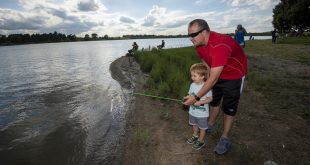