I am going to share a photo of a big fish that was caught in Nebraska recently.  Yes, I realize that some of my blog readers will know all about this catch already, it has been making the rounds on the internet and that is where I got the photos and information.  But,  I want to blog about it because there are a lots of other folks who have not heard about it.  If there is one thing I have learned, it is that people are fascinated by BIG FISH!

This is a big flathead catfish that was recently caught at Branched Oak Reservoir. I cannot tell you the name of the gentleman, but I will tell you that if you want to read more about the catch, you can HERE .  As a matter of fact, if you are interested in fish and fishing in Nebraska, the Nebraska Fish & Game Association is an on-line forum that has the best “chatter” that I know of with fishing reports and all things fishing-related in Nebraska.  I would strongly suggest you check it out!

There has been speculation that Branched Oak could one day produce a new hook & line state record flathead.  Our current hook & line state record flathead catfish is a fish that was caught from the Loup Power Canal in 1988.  That fish weighed 80 pounds.  Although this current catch had an impressive length of 57 inches, I do not believe it had the weight to exceed 80 pounds.  I have some pictures of flatheads that were weighed at 80 pounds or more, and if you can believe it, they looked a lot bigger than this fish.  Regardless, this fish was a TROPHY by anyone’s standards, and it is still swimming in Branched Oak!

I must point out that no state record flathead catfish will be certified from Branched Oak Reservoir.  With the catch & release regulation at Branched Oak, and that means immediate release, any fish held for the mandatory weighing on a certified scale and verification by a Nebraska Game & Parks Commission fisheries biologist would mean that fish, even if it was then released, would have been caught in violation of fishing regulations.  No catch made in violation of any regulations can be certified as a state record.

I know that will seem “unfair” to some and may mean we are precluding the breaking of a notable state record.  But with our current rules and regulations it cannot be done.  However, may I point out that does not ruin the wonder, the awe, of catching such a huge fish, or the imagination that such a fish swims in Branched Oak waters.  Isn’t that is what fishing is all about!

I will continue to make note of fish of state record proportions that are caught and released!  As a matter of fact there have been at least a couple, three of those fish caught from Nebraska waters in the past year ( Big Fish! , Big Fish!  It’s Happened Again! , The Beast ).  I do not care if that flathead caught at Branched Oak was required by law to be released, it is still an exceptional catch and an exceptional angler who caught and released that fish without a second thought!  Congratulations and a tip of the fishing cap! Daryl is a lifelong resident of Nebraska (except for a couple of years spent going to graduate school in South Dakota). He has been employed as a fisheries biologist for the Nebraska Game and Parks Commission for 25 years, and his current tour of duty is as the fisheries outreach program manager. Daryl loves to share his educational knowledge and is an avid multi-species angler. He holds more than 120 Nebraska Master Angler Awards for 14 different species and holds more than 30 In-Fisherman Master Angler Awards for eight different species. He loves to talk fishing and answer questions about fishing in Nebraska, be sure to check out his blog at outdoornebraska.org.
Previous Transition Time
Next Come Join Us at Family Fishing Night in Papillion 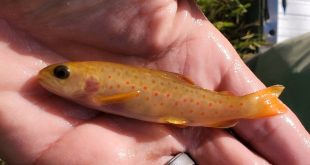