Here we sit on the Monday after the opening of the 2014 Nebraska Spring Turkey Shotgun opener. For a majority of our gobbler-chasers this was the official kick-off to our obsession.  What a wild weather-ride it was, too, in much of the state.  A beautiful and very warm Saturday followed by a Sunday that…well…wasn’t.  I welcome and look forward to hearing your turkey-observations from this past weekend as I share my own from the timber’s edge. Family Weekend.  The opening weekend of the shotgun season has become a rather special family event for our small household of four.  It was important enough that this year Leslie, the matriarch, went afield even with her broken leg.  However, as the kids keep growing the ability to stick together has gotten tougher.  So on Friday afternoon we got two blinds set-up on a couple of cropfield edges we’ve had luck with in the past.  (Drive-by listening earlier in the week also revealed a few gobblers were using both areas).

Early Arrival.  Our first challenge on Saturday was getting up early enough to be able to sneak to the blinds in the cover of darkness as both spots required crossing large open fields.  Getting up extra early is always easier on the first day of a hunt than it is the second morning.  Emma and I made it to our spot a full 5o minutes before sunrise, but not a moment too soon. Minutes after we arrived a barred owl let out a hoot just above us and was answered by a nearby gobble.  Later we realized just how many eyes may have been able to watch us approach if it had been much lighter.

Flocked Up.  As shooting hours arrived (30 minutes before sunrise) we found ourselves near several gobblers and a few hens.  At fly down we realized how many.  Landing in the field in front of us we counted at least 4 strutting toms, ten hens and a few that might have been jakes.  A few more may have shown up in the field, but we quit counting.  This group hadn’t yet broken up much, if any, from their winter flock.  Our best chance at a tom was to work the hens.

Breaking Up.  Leslie and Logan had a bit different experience just a few miles south of us.  The gobbles they heard were a bit more spread out and when they had their close encounters they were with smaller groups of turkeys.  The first came when a tom was led past them – at less than 5 yards! – by three hens.   The next was when they sweet-talked a tom all by himself to under 25 yards in the middle of the morning.  This break-up of the flocks can be a great time to be afield as the boys do their darndest to find and keep up with the girls.

Evening Pecking Order.  Our evening hunt on Saturday took place with all four of us in a place that has become our opening-day afternoon spot.  We got responses throughout our sit, but nothing more than courtesy gobbles, until just before fly-up.  The tom was spitting and drumming his way straight to us, until another tom gobbled in the draw to our south.  At the sound the first tom got noticeably nervous and walked off to our north – never getting closer than 50 yards.  He must of had his tail-feathers kicked a bit earlier in the day. Pecking order is huge in the turkey world.

Sunday Sleep In.  The threat of harsh weather on Sunday kept me in bed. It only felt wrong until I heard the wind already howling and the rain starting in the pre-dawn light.  My brother Gabe and his girlfriend Ally, hunting further south, were able to get in a morning hunt along with a young jake before the storm.  They held their fire because of the three other “older-sounding” gobblers they could hear approaching.  Unfortunately, just before any of them showed up the rain came and the birds left.  However, it does hint toward the idea that the birds are breaking up.

Best is yet to Come.  Hunting can be very good on the opening weekend of shotgun. However, my favorite times to chase spring gobblers in Nebraska are yet to come.  So don’t fret if you have yet to fill a tag or even venture out. The season is long and the opportunities are still plentiful…

Aaron "hershy" Hershberger is an Outdoor Education Specialist with the Nebraska Game and Parks Commission. He loves being outdoors. When not outdoors he is day-dreaming about being outdoors and/or whining that he is not outdoors. Hershy has been a Hunter Education Instructor, in two states, for nearly three decades & a Bowhunter Education Instructor for over 20 years.
Previous Six Steps to Succulent Spring Turkey
Next Five is enough (almost too many) 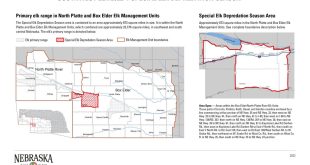