LINCOLN – A recent Supreme Court ruling on the ownership of abandoned railways won’t affect Nebraska’s Cowboy Trail.
Earlier this month, the U.S. Supreme Court ruled that after a railroad has abandoned a line, the land should revert to owners of the adjacent property instead of to the federal government. Some fear the ruling threatens Rails to Trails projects across the country built on abandoned railways.

The Cowboy Trail, however, is built on land that has been railbanked, rather than abandoned. When a trail is railbanked, it may be developed into a trail but the railroad retains the right to convert it back into a rail line.

The Rails to Trails Conservancy purchased the right-of-way for the 321-mile stretch of land between Norfolk and Chadron in the early 1990s from the Chicago and NorthWestern Transportation Company. The Conservancy gave the right-of-way to the Nebraska Game and Parks Commission in 1993. Since then, Game and Parks has worked to develop and maintain 196 miles of the trail between Norfolk and Valentine for walking, running, bicycling and horseback riding.

Jerry Kane is the news manager with the Nebraska Game and Parks Commission. He can be contacted at jerry.kane@nebraska.gov or 402-471-5008.
Previous Get to Interview Tom Osborne, Help Teammates at Hunt with Radio Show
Next Nebraska Crane Festival Celebrates Stunning Spectacle 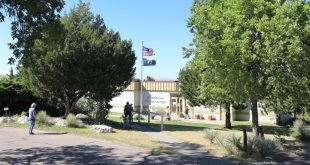